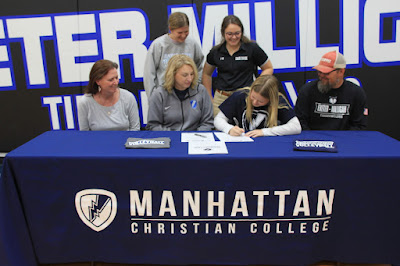 Exeter-Milligan’s four year varsity started Jozie Kanode chose to sign on the dotted line with Manhattan Christian College in Manhattan, Kansas on Wednesday, November 9.  Joining her at the table were her parents and coaches along with MCC Athletic Director and Head Volleyball Coach Lauren Sanders.  In the front row from the left were Lisa Kanode, Sanders, Jozie Kanode and Darth Kanode.  Behind are Exeter-Milligan volleyball coaches Taylor Erdkamp (left) and Madalynn Fousek (right).

When a college volleyball coach travels almost 150 miles for a 15 minute signing event, you know she wants a player.

Kanode, along with her parents, Darth and Lisa, her volleyball and basketball coaches, lots of friends and family, gathered in the Exeter-Milligan gym to witness the signing.

Kanode plans to attend the small private college in Manhattan where they offer a dual credit program with Kansas State University.  She hopes to double major in Bible (from MCC) and elementary education (from KSU).

She first heard about the volleyball program and the college when she went to church camp last summer and earned a scholarship from the school.  She found out that their volleyball program had been successful in the NCCAA Division 2 arena and decided to investigate the possibilities further.

She had been set on attending a state college in Nebraska and not planning to participate in college sports but was swayed when she attended a summer volleyball camp at MCC and met Sanders who immediately offered her a spot on the team, “She said my fundamentals were good and she wanted me for her roster.”

One of the most appealing parts of the college for Kanode was its size.  The college has less than 200 in person students although its proximity and academic relationship with KSU makes it perfect for her.  “It definitely feels like the whole situation is God’s plan.  I was dead set on Wayne State and wouldn’t even look at other colleges and then I got the scholarship at camp.”

She noted the influence that Exeter-Milligan volleyball coach Madalynn Fousek, along with her mom and coach Taylor Erdkamp have had on her game to get her to the position that she can play in college. “Fousek definitely pushes me.  Having my Mom as a coach has been great.  I think I have gotten really lucky.”

“I don’t think I would have grown as much without their influence.  I am excited and ready to go.”

Fousek is going to have a hard time letting her go.  She noted Kanode’s outstanding work ethic beginning her freshman year when she started and improved every season.  “I have enjoyed seeing how much fun she has on and off the court.  She loves the game.  She has had a positive attitude and demeanor and has adapted well to changes when we have asked.  We will miss her leadership as well.”

Kanode broke the Exeter-Milligan record for digs this year with a career 1045 total. She also added 139 ace serves to the mix with 47 of those launched this season. This year she switched from libero to anchoring the back row of the team and then moved to setter mid-season. She has been a 5’2 powerhouse for the Timberwolves even notching 78 kills for Exeter-Milligan.

She has also enjoyed off season volleyball, playing on club teams and even a travelling team that played a tournament in Hawaii the summer of 2021

MCC Coach Sanders is looking forward to having Kanode on the team. She first spotted her at the summer volleyball camp and was “immediately drawn to her presence on the court.  She is a very good defensive player, knows and reads the game well. We also loved her joy and energy on the court!”

Sanders plans to use Kanode as a defensive specialist. “We currently only have one DS on the squad so we were looking to add another DS to take pressure off our middles from playing back row. Jozie will fit right into our team and will instantly make our defense stronger. Her strengths are her knowledge of the game, her fundamentals and a don't quit attitude! “