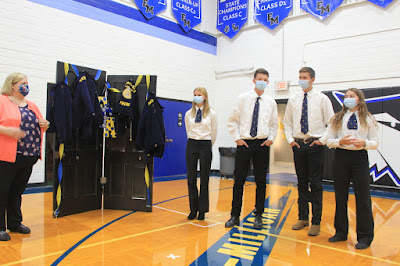 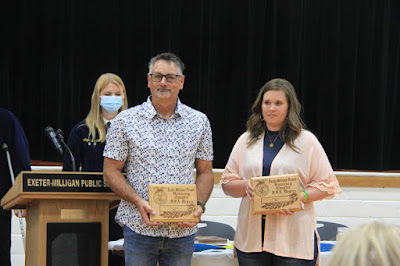 The Exeter-Milligan Friend FFA held their annual banquet on  Thursday, April 29th at the Exeter gym.

The evening was hosted by the outgoing officers.  After an invocation the members and their families enjoyed a brisket meal.

Many of the members were honored during the evening.  Greenhand degrees and chapter degrees were presented as well as all of the awards the members had earned at district and state events.

One of the highlights of the evening was the presentation of a State FFA degrees to Jaiden Papik.

The chapter also recognized the significant contributions to the ag community made by Jerry Boeck and Erika Arp and presented them with honorary chapter degrees.

The evening ended with two significant events, the hanging of the jackets by the senior and the announcing of the 2021-2022 officer team.

The current officer team opened the envelopes to announce the new members in their current position.  For the 2021-2022 school year Chase Svehla will serve as Historian, Kiarra Fennell will be Parlimentarian, the Sentinel will be Ben Bartu, Shelby Lawver will be Reporter and Christian Weber will again serve as Treasurer.  Cameryn Brandt will be Secretary, with Kiah Songster as Vice President and Vivian Weber as President. 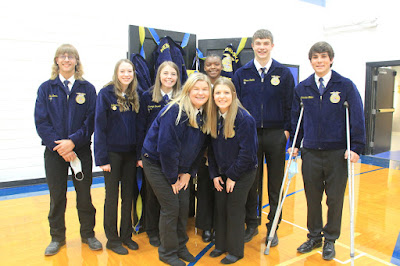