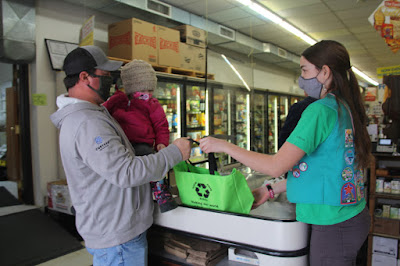 Girl Scout Brooklyn Oldehoeft bags up groceries for Kollin and Logan Harre in a free reusable tote she is handing out as part of her Girl Scout Bronze award.

Shoppers at Greg’s Market in Exeter received a bonus on Saturday as Brooklyn Oldehoeft, a member of Exeter Girl Scout Troop 20703, passed out reusable grocery bags as part of her Bronze award.

Oldehoeft, a sixth grader at Exeter-Milligan, has been a member of her girl scout troop since Kindergarten.  Currently a Cadette scout, Oldehoeft began working on her Bronze Award last year as a Junior scout but the pandemic  got in the way.

First she had to complete a set of badges called a Journey.  Since she could choose which journey she wanted to do, Oldehoeft chose the Outdoor journey.  During that she had to identify a problem she wanted to do something about,  come up with a sustainable solution and then take action to solve the problem.

Oldehoeft found her problem blowing in the wind, “On our way to Lincoln I saw a lot of (plastic) bags out in fields and in places where they shouldn’t have been.”

After doing the paperwork which included prompts to guide her to a project, Oldehoeft realized she wanted to provide reusable bags to her community.

Her mom, Kendra Oldehoeft, is also her leader.  Kendra noted that the paperwork helped guide Brooklyn to “issues to see in her community.”

Brooklyn and her troop members (a total of three) raised funds through selling Girl Scout cookies and also had a bake sale last year during the craft show at the Exeter Legion.

With her funds raised, Brooklyn looked online and found different companies who make reusable bags.  “I picked one and created the design on the bag.”

She chose to distribute them in Exeter, “I wanted to be where we would see them and wanted to get the community involved.”

Currently Greg’s Market isn’t allowing reusable bags because of the pandemic, “Right now they can take them out but I hope in the future they are able to bring them back,” explained Brooklyn.

This was an experience where Brooklyn learned from start to finish, from raising funds, to an awareness of needs and finally seeing a project through to the end.   She learned, “If you want to make a difference it takes hard work, but you can do it.”

“The world needs lots of change and people like me can make it happen.”

Brooklyn credits the Girl Scout program for “helping girls boost their confidence and achieve their goals.”

She spent approximately 25 hours on the project.  As she continues on in the Girl Scout program she hopes to find meaningful projects for both her silver and her gold award.

Despite the pandemic their troop is participating in online programs and getting online with their troop and will be selling cookies starting February 12.