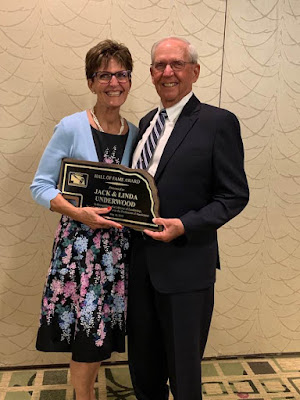 Jack and Linda Underwood were recently inducted into the Nebraska Auctioneers Hall of Fame.

“Being the first female inducted into the Nebraska Auctioneers Hall of Fame meant a lot to me.  It also meant a lot that Jack and I were to share it together,” Linda explained.

“It was a complete surprise. I knew that I was up for an award.  Both of us were a little bit speechless because we weren’t expecting that at all.”

The auctioneering career of the Underwood’s began just over 35 years ago when the couple starting working for an auctioneer part time.  Jack saw in Linda the potential to shine as an auctioneer and unbeknownst to her paid for her tuition to Nebraska Auctioneer school and insisted she attend.

While Linda became the “fast-talking” Colonel, as one observer noted, Jack got his Nebraska real estate sales and later his brokerage license.

The two have worked side by side ever since.  Jack manages the auctions and oversees the real estate transactions, and Linda guides a team in preparing items for auction.  She oversees every detail of the auctions from the timeline, to the wording on the auction bills.

Not long after the couple got their start in the business, Linda was recognized as the first female in the Nebraska Auctioneer’s Association history to earn their rookie of the year honor.

Linda also went on to be the first female member of the association to be elected as a board member and an officer (secretary/treasurer).

Throughout their career the Underwood’s have had the opportunity to work benefit auctions in five states including a 100th anniversary celebration for Harley Davidson where she worked with Willie G. Davidson, the grandson of Harley-Davidson co-founder, William A. Davidson.

In addition to their well-known local auctions, they have had the opportunity to sell large art works in the state including the tour d’Lincoln pieces of bicycles and lightbulbs.

Their crew, Colonel Bob Mueller, Clerk Rhonda Maxson, cashiers Kay Due and Megan White, and ringman Lyle Hayek, have faithfully supported the Underwood’s in their average of 40 auctions per year.

Due commented, “I have enjoyed working for Underwood Realty and Auctions for about 10 years now. Jack and Linda have put so much time, effort and hard work in their business and are so deserving of this award.”

The Underwood figured they have held well over 1000 auctions since that day in July of 1987 when they held their first auction. In the late 90’s they had several years where they held 80 auctions each year.

There are some auctions they will never forget, especially the auctions with bad weather in their early years.  “Those were the days before we had a (pickup) topper. Those were the days when you toughed it out. One time my hands froze to the microphone before a man loaned me his gloves lined with lambs wool,” Linda described.

“There are no two auctions alike, never. We have formed lasting friendships through our business.  We often will start with an auction for one family member and end up doing business with many members of the same family.”