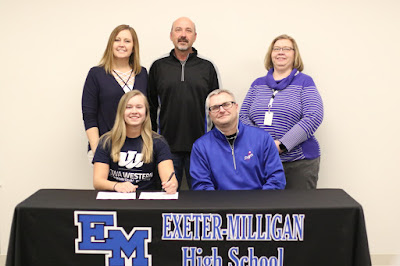 Josie Kresak signs to play softball at Iowa Western Community College while seated at the table with Fillmore Central/Exeter-Milligan Head Softball Coach Aaron Lauby.  Behind are Kresak’s parents Brad and Tracy Kresak and on the right behind is assistant FC/E-M softball coach Lorie Sliefert.

Exeter-Milligan Senior Josie Kresak is will be heading to Iowa in the fall to attend Iowa Western Community College and play softball under Coach Ben Greer.

The Fillmore Central Exeter-Milligan standout plans to pursue a degree in Biology “with the intention of eventually going into marine biology.”
She added that she really likes the campus, “It's really nice and everything is easy to get to. Coach Greer was very welcoming and straight forward about what the Reiver softball program is all about.”

She has had a stellar career with the FC/E-M team.  This year Kresak was recognized as a first team All-Conference member, a second team Class C All-State selection and an All-Area York News Times co-captain with a .462 batting average her senior season. This year Kresak scored 42 runs, 11 doubles, five triples and seven home runs.

FC/E-M Coach Aaron Lauby has high aspirations for her future, “I think Josie is a darn good ball player.  She is dependable, has great instincts, a solid work ethic and every year since she was a Freshman she just kept improving in all aspects of her game.  I also think the more a coach gets to see her play on a daily basis, they will appreciate her ball skills on defense, base running and her offensive versatility.”
Reiver Coach Greer is looking forward to Kresak’s future as well, “Josie had an excellent high school career and plays a position we were hoping to add some depth in.  Being left handed is an added bonus and we’re excited about the upside she has as she’ll continue to develop at Iowa Western.”

Kresak played centerfield on varsity all four years and that experience, “helped me step up quicker and become a better leader throughout all four years. My teammates also always pushed me to improve my skills. The coaching I received helped me become a smarter and better player. I will use the skills that I have gained in high school and apply them during my college career. I think my biggest challenge will be adjusting to a more challenging environment.”

Greer noted that, “It’s not easy to be a Reiver with the high expectations we have year in and year out.  So when we break down what we’re all about as a program during the recruiting process, it is either something the kids will really enjoy, or it’s a place they definitely do not want to be.  Knowing that, Josie has signed up for being held accountable and working hard every day in the classroom and on the field.  We’re thrilled that she’s the type of person who wants those things in her college softball career. “

Lauby notes that Kresak’s even temperament will serve her as she moves on to play college ball, “I love Josie's attitude.  She doesn't allow herself to get too high or too low, she stays emotionally consistent and I love competitors like that.  Softball can be an emotional game and we have to always be in control of those emotions or they can get the better of us.  Those that are good at controlling that which is under their control and not let the things that are out of their control fuel their emotions tend to maintain a consistent level of success on and off the field.  Josie has that.”

Greer recognized the quality player and person he will be coaching in Kresak, “We’re far more interested in our players becoming successful people than just being all about softball and I believe Josie is a perfect example of that.”