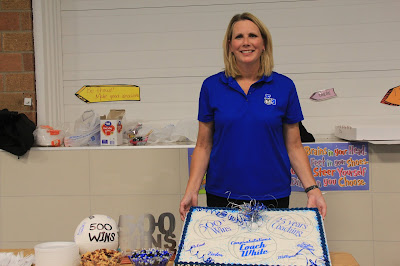 Darcy White, Exeter-Milligan Head Volleyball Coach, is a finalist for the national coach of the year.  She is shown here when she was recognized for coaching 500 wins in her career during the 2017 season.


Exeter-Milligan Volleyball Coach and Physical Education teacher Darcy White recently received notification that she has been nominated as a finalist for the National High School Athletic Coaches Association national coach of the year.
“It’s a big honor just to be recognized by the coaches association,” White explained, ”but when I got the email (about the national honor) I was thrilled.”
The national coach of the year will be recognized at the national conference in June in Bismarck, ND.  White plans to attend the event.   There are just eight national finalists in the volleyball category.
White is one of fourteen coaches and one athletic director from Nebraska who were nominated for the national award.
White’s nomination comes from the Nebraska Coaching Association, but the final coach is chosen by an expert in that field of coaching.  Taken into account for the award are the longevity of coaching, service to high school athletics, honors, championship years, and winning percentage.
Last year during a home match, White was recognized for her 500th career win record in her 25 years of coaching volleyball.  She began her coaching career in McCool Junction in 1991 and then went on to coach at Exeter and at Milligan before the schools combined.  She has been the Exeter-Milligan head volleyball coach for the last 17 years.
White has guided Exeter-Milligan teams to five state championships, one runner-up finish and numerous district and conference championships.
In 2012 White was recognized as the Nebraska Coaches Association as the volleyball coach of the year for the 2011-2012 season.
White doesn’t forget how these accolades happen, “you can’t win state without amazing athletes.  The credit goes to the kids and my support staff.  Mrs. Kroll gets the credit as much as I do.”
White played volleyball at the University of Wyoming and was inducted into the University of Wyoming Athletic Hall of Fame as an athlete in 1999 and for her 1989 Elite Eight finish team in 2005. She was inducted into the Nebraska High School Sports Hall of Fame in 2003.
White lauded the Nebraska Coaching Association, “Our coaching association in Nebraska has one of the largest memberships nationwide.  They are so supportive of us.”
Posted by Leesa Bartu at 7:30 AM