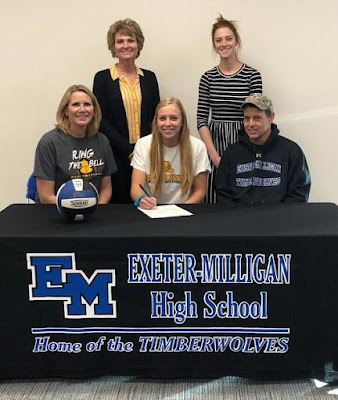 Above: Katherine White signs on the dotted line to play at Missouri Western State University surrounded by her parents Brad and Darcy White.  Behind her Assistant Volleyball Coaches Laura Kroll (left) and Katherine Smith (right).


It wasn’t hard for Exeter-Milligan three-sport standout Katherine White to decide where to continue her education.

It was all about the volleyball. White, who has been an all-state outside hitter for Exeter-Milligan the last three years of high school, signed a letter of intent to play for Missouri Western State University in St. Joe,  Mo.

She was invited to campus this past summer to participate in one of their elite volleyball camps. The experience sealed the deal for White, “Their coach was the first thing that stuck out to me.  I felt that connection right away.  I also met a few of the girls and they were so nice.”

It goes without saying that White had options, but it was important to her to go with a Division II school.  “They don’t have a huge roster like a NAIA school.  They don’t have a JV team.  It feels like a small team like we had here and will help me connect better.”

She understands that she will have to fight for a spot at NWSU, “I had the same type of pressure here for state level games.  My biggest challenge will be learning a new bunch of girls.  So far, it’s been easy to connect with them, but getting to where we are comfortable will be the challenge.”

She will be playing for Coach Marian Carbin at NWSU.  Carbin has been looking for a player like White, “We liked her court presence; the way that she competes hard but stays calm and is a good teammate. We also liked her ability to be a 6-rotation player, playing both front row and back row effectively.”

White who had a team high 454 kills her senior season balanced this with her 251 digs for the season and 63 ace serves for the team.  This season she broke the school record in kills and in points scored in one season.

Her high school career made an impact on Exeter-Milligan volleyball records. In her career she sits in the second place spot for total kills with 1154, in first place for total aces with 199, in third for total digs with 865.

Carbin hopes to capitalize on White’s combination of strengths in St. Joe, ”I think Katherine will compete for one of our open Outside Hitter positions. We have been looking for a 6-rotation outside for the past two recruiting classes, and I think Katherine has the potential to fill that role.”

One thing different at NWSU is White won’t have her mom, Exeter-Milligan Coach Darcy White, as her coach.  Katherine has played under different coaches on club volleyball teams and had no qualms about the experience.

Exeter-Milligan Coach Darcy White has enjoyed the challenge of coaching her daughter, “The best part of being able to coach her was probably that we have gotten to spend a lot of time together not only during our season, but also during her club seasons where we have had the opportunity to do quite a bit of traveling.”

"I think one of her strengths is that she doesn't take herself too seriously, but this was also an issue between her and I at times because she wasn't always the most coachable player for me.”

While she is keeping her options open right now, White has an inclination to pursue a career in education. She has a bit of a head start as she has been taking college level courses at Exeter-Milligan this year through SENCAP (Southeast Nebraska Career Academy Program).

Coach White is confident in the way Exeter-Milligan has prepared her for the next step, “Exeter-Milligan provides the opportunity to be involved in many activities as well as academic challenges .  KK's ability to be successful in those activities and in her academics gave her the confidence to continue to pursue those challenges and opportunities going forward.”

With all her success in high school so far, attending the state volleyball tournament all four years, the last two years at state basketball and state track, Coach White has high hopes for Katherine’s collegiate experience, “Hopefully she will continue to be successful at the next level, but it will be important for her to continue to work hard at these things and not take this for granted. It's important for her to keep a positive attitude while being patient as she becomes more comfortable with her role on her new team and in her academic focus.” 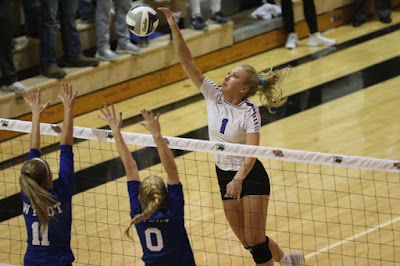 White sends a kill over the net at her last high school volleyball game in the state tournament against Wynot.