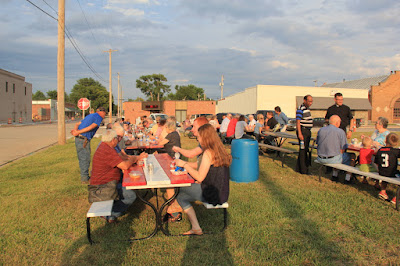 The Exeter Fun Days event began Friday night with a free hamburger and hot dog dinner sponsored by the Exeter Area Community Foundation.  Greg Yound (pictured below left) and his son Travis, did the cooking (along with their excellent kitchen staff).

Exeter Fun Days weekend opened Friday evening with dinner and a movie sponsored by the Exeter Area Community Foundation.  After enjoying hot dogs and hamburgers part of the crowd moved to the empty lot just south of Erdkmap Lumber to enjoy the movie "The Sandlot" which was projected onto the wall of Speece Chiropractic.  Others opted to take try their luck at the 5K glow run.
The glow run was organized by four Exeter-Milligan students, Cammie Harrison, Daisy Kanode, Blake Meyer and Clint Oldehoeft as a fundraiser for their Ambassdors of Music trip to Europe next summer.  Participants could choose a one mile run or a five mile run.  Mile run winners under 12 were Troy Kallhoff and Mallory Staskal.  Winners in the over 13 category were Clint Oldehoeft and Jozie Kanode.  The 5K race had three age categories.  Winners over age 41 were John Tauriella and Meridith Smith.  Winning the 19-40 age group were Nick Sudrla and Brook Betka and under 18 winners were Joel Klemm and Cammie Harrison.

Saturday activities started with a softball tournament at the ball field along with garage sales all over town.  A bake sale was held at the fire department in the morning.  The afternoon began with the car show followed by the parade.  In the evening a free will offering meal was held at the Legion where polka music began at 8:30 and a special celebrity baking auction was held at 6:30 p.m. 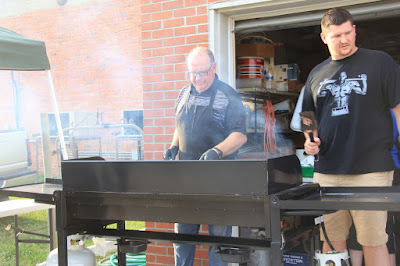 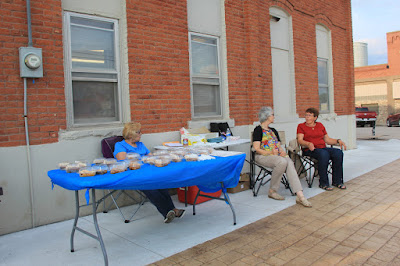 The Woman's Club members were selling pie at the evening meal.  Much of the crowd moved from the picnic tables to the lot just south of Erdkmap Lumber to enjoy the movie "The Sandlot" which was projected onto the wall of Speece Chiropractic.  Others opted to head to Gilbert's park to take part in the 1 mile and 5 mile glow run. 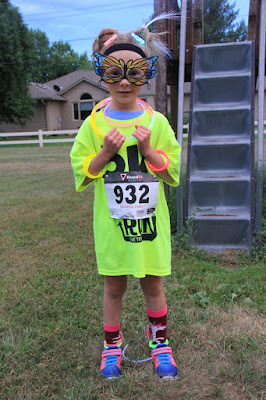 Above Saydee Kassik was all "glowy" for her one mile run.  Below (from the left) Chezney and Jozie Kanode along with Olivea Swanson showed their glowing spirit! 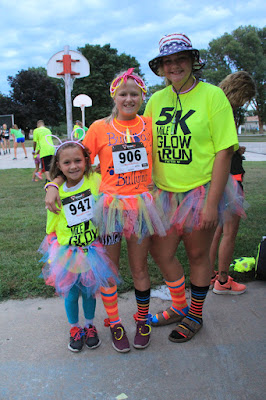 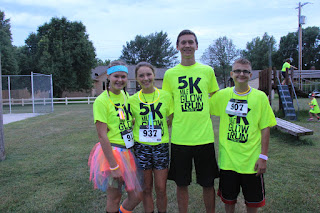 Exeter-Milligan students (l-r) Daisy Kanode, Cammie Harrison, Clint Oldehoeft and Blake Meyer organized the glow run as a fundraiser for a music trip to Europe next summer.  Below - the one mile runners took off at a quick pace. 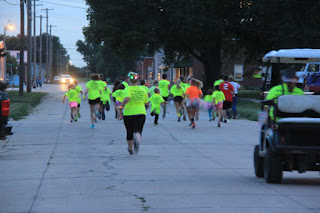 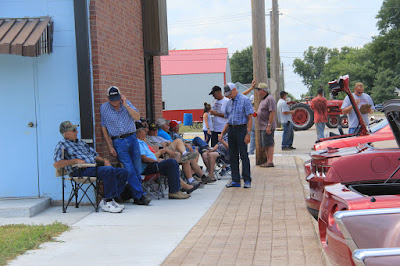 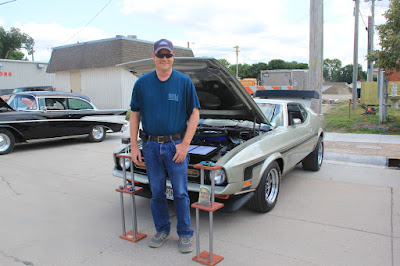 Joe Michels of McCool Junction, Neb. was a double trophy winner at the Exeter Fun Days Car Show.  His 1971 Mach 1 Mustang picked up the Mayor's Choice trophy and the Mechanic's Choice Trophy. 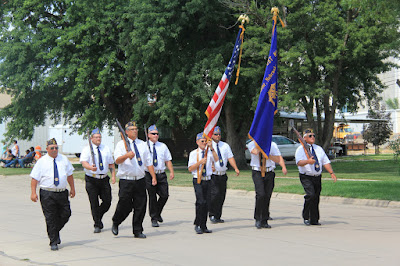 The Exeter Fun Days Parade was kicked off by the American Legion and Sons of the Legion Color Guards.  The group paused in front of the Legion while Caitlin Murphy sang "The Star Spangled Banner."  Below - One float honored America's every day heroes include military members, local clergy, fire and rescue department members and teachers. 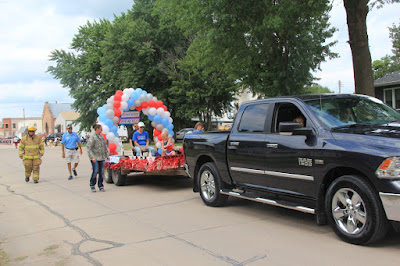 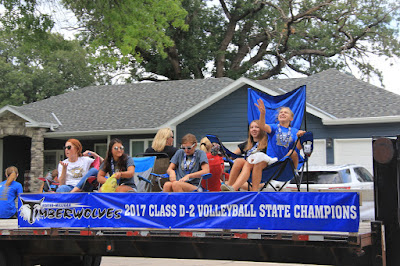 The Exeter-Milligan Volleyball Team, State Champions, rode through the float tossing out candy. 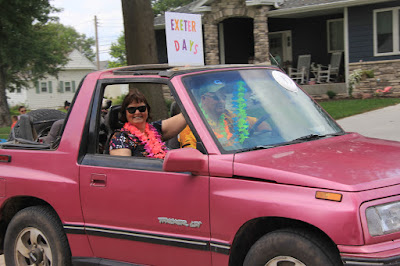 Joe and Sharla Dinneen got in the fun spirit for Exeter Fun Days. 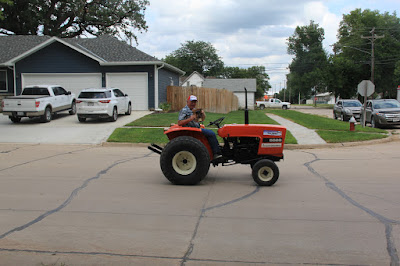 Tom Weber of Friend shows off the trophy he won for his tractor in the car show. 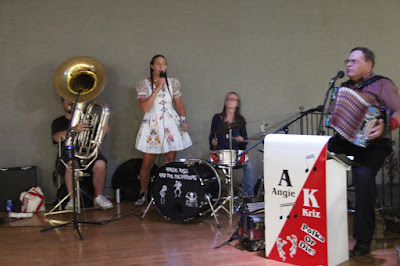 The Legion was hopping Saturday night as the Sons of the Legion and the Fire Department members hosted an evening meal and polka music.
Posted by Leesa Bartu at 7:30 AM