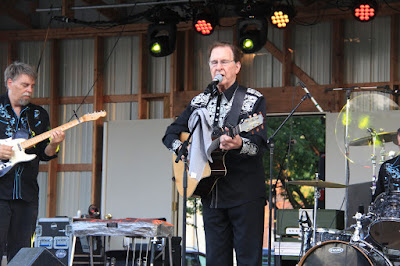 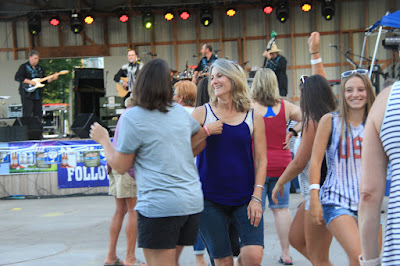 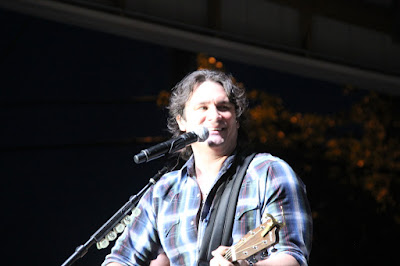 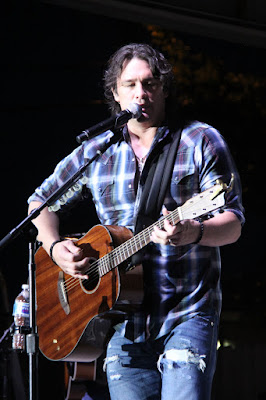 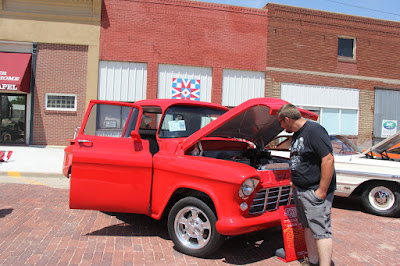 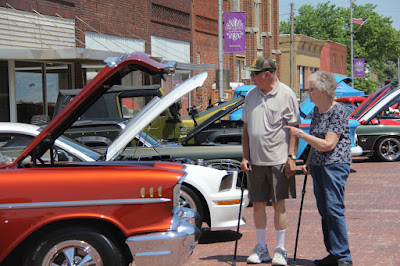 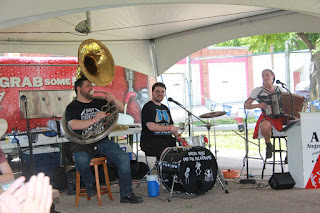 Above – Angie Kriz and the Polkatoons performed in the Beer Garden in Milligan at June Jubilee on Saturday afternoon.
Below– Briana Capek, the State Junior Auxiliary President, rode in the parade on Sunday afternoon. 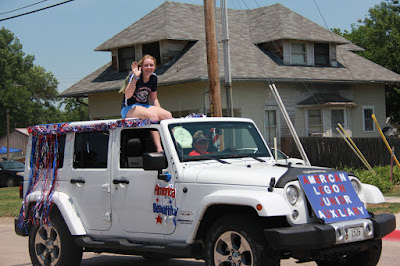 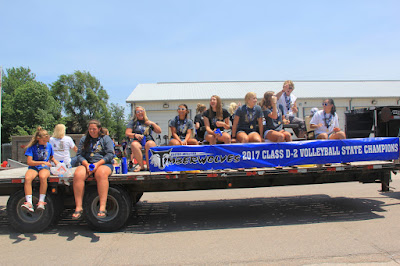 Above – The Exeter-Milligan State Championship Volleyball team made an appearance in the parade Sunday afternoon.
Below – Big brother Tommy Kallhoff shares candy with his brother Paul at the Milligan June Jubilee parade on Sunday afternoon. 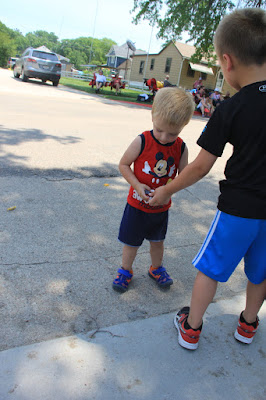 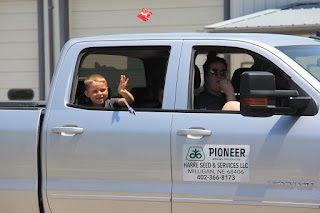 Above– Braxton Harre tosses candy to some of his friends along the parade route at the Milligan June Jubilee parade on Sunday afternoon.  His aunt, Paige Harre, is also ready with the candy.
Below – Landri Johnosn (left) and Piper Grummons (right) were busy tossing candy from the Total Look and Bohemian Beauty and Spa float. 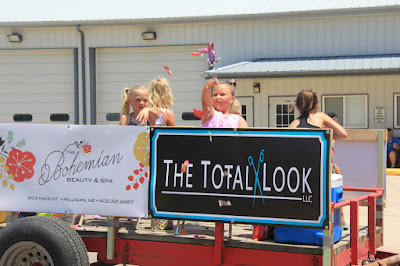 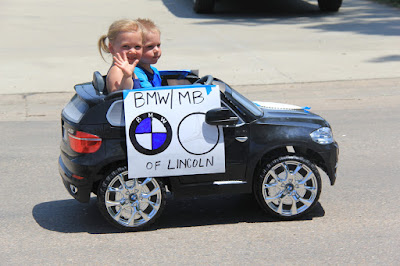 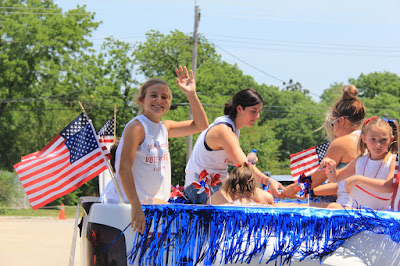 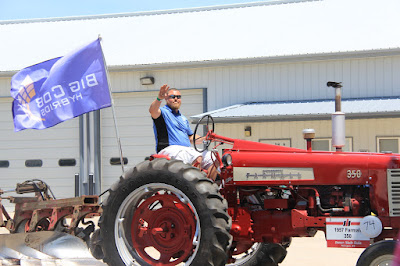 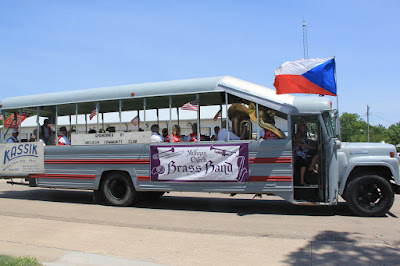 It wouldn't be the parade in Milligan without an appearance by the Milligan Czech Brass Band. 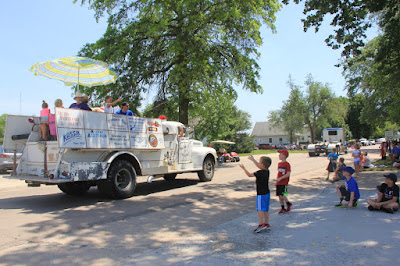 The kids enjoyed being sprayed by the old fire truck during the parade as much as they enjoyed getting the candy. 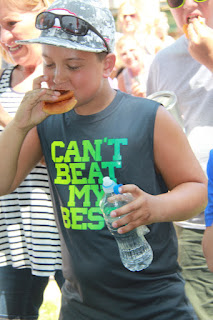 Braxton Harre works hard to get a kolache down in the kolache eating contest. 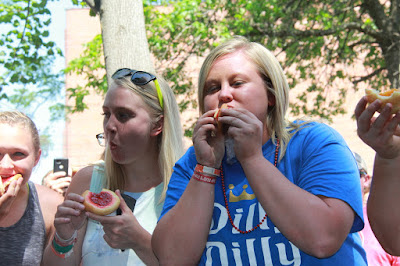 The girls packing in the kolaches. 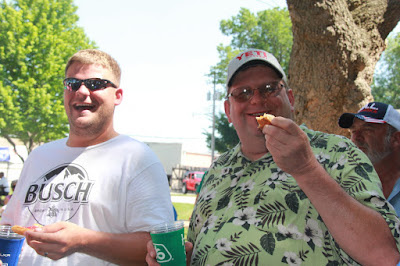 Above– This father and son duo, Tony (left) and Perry Kassik, didn’t win the kolache eating contest at Milligan’s June Jubilee, but they had a great time and they got a free kolache!
Below – The finalists in the kolache eating contest at Milligan’s June Jubilee had to win their division to be in the finals.  From the left are Mikey Bartu (18 and under), Joel Jiskra (male 19 – 65), Sam McPherson (65 and older) and Melanie Fowler (female 19- 65).  Fowler took home the win for the third year in a row. 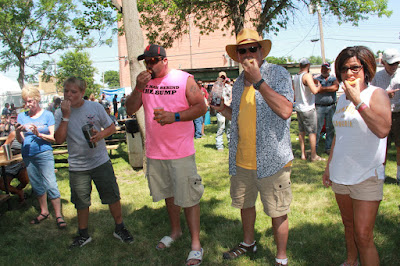 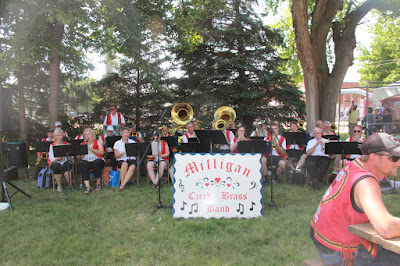 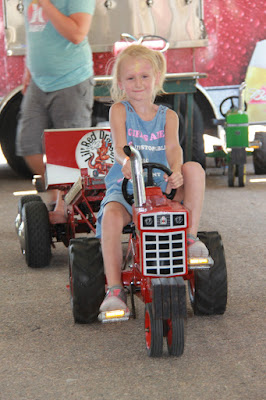 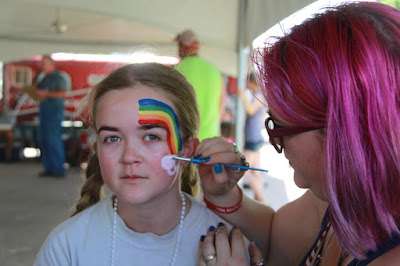 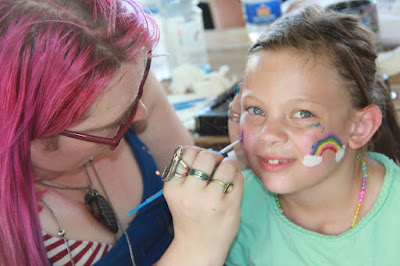 Above – Mackenzie Jaeger decided her other cheek needed a decoration at Milligan’s June Jubilee.  Jessie Johnson painted faces in the afternoon under the tent.