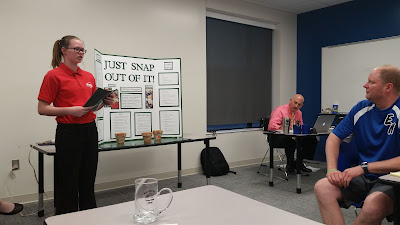 After opening the Exeter-Milligan school board meeting, President Sharon Kuska moved quickly into the consensus agenda starting with the treasurer’s report. The  board approved the agenda.

The curriculum report was presented by Jordan Marr on his classes in social science and business. He discussed his business math class in which he has created online curriculum which allows the students to work at their own pace even if he is not in the classroom for a day.

He shared that presented the information at the Nebraska Educational Technology Association (NETA) conference noting how it could wean the district from dependence on substitutes.  By allowing the students to work at their own pace he found they eventually “covered an additional four chapters which was about 40 days of lessons.  This worked better than previous methods and the kids seemed to like it.”

He noted that the America Government class again won the traveling plaque during the jeopardy game at county government day.  He has also instituted a process for students to present petitions to change some things to Mrs. Kroll.

After briefly sharing about the other courses he teaches and the changes that are coming for quiz bowl competition, Marr informed the board that he is currently restoring some of the old trophies that were stashed all over the school.  His plan is to make a digital library of all the trophies in Exeter and Milligan.

Marr, a member of the districts safety committee briefly shared some of their progress and goals.
Next on the agenda was presentations from two of the Exeter-Milligan Family Career Community Leaders of America students who qualified for the National conference this summer.  Their advisor, Mary Lou Vossler introduced Caitlin Murphy presenting on her recycling project and Daisy Kanode who presented on the subject of depression.

The board approved an interlocal agreement with Friend to share an Agriculture teacher. Friend will hold the contract.  Sheffield noted that they also agreed to share a science teacher for .25 time.  Lorie Sliefert will teach the first two periods in Friend before coming to Exeter. Board approved the agreements.

The board reviewed the updates made to the crisis committee policy. Denice Kovanda, the chair of the crisis committee, explained, “The policy was just a listing of what members would do and it was quite muddled.  It wasn’t really policy material. We made a handbook that will be with each crisis team member.  We made it more concise.”

Committee member Mary Lou Vossler added, “ We all feel more comfortable knowing what each member is responsible for and what we are supposed to do.”

Also reviewed was the policy on memorials.  This was established by the committee and separated from the crisis policy.  It outlined that memorials may not be displayed anywhere on the school premises or in the school yearbook.  Also, no memorial services are allowed on school grounds on a school day.

The board held an extended discussion on the reasoning behind these policies.
Next on the agenda was volleyball Coach Darcy White who requested that the board move all of the home volleyball games to Exeter.

White, who has coached volleyball for 25 years, 16 of those at Exeter-Milligan, noted that the updated and new facilities in Exeter were appreciated last year when the team played their home games in Exeter (due to maintenance issues in Milligan).

She mentioned that the soundproofing in Exeter, the access to restrooms and handicap accessibility along with the longer and wider court in Exeter make it a better option for the team and their fans.

White, who also teaches PE at Exeter-Milligan had concerns about the safety in Milligan not only for volleyball but for the PE classes as well.  “There is no padding on the wall that extends the width of the gym.  Only behind the backboard.  The restrooms are not easily accessible and it has just two small locker rooms.  We also have congestion when entering and leaving the court.”

White polled the other volleyball coaches in the conference and read their responses to the board.  Many of them mentioned the close quarters and concerns for the safety of their players.

To emphasize the need for a longer and wider court White shared a clip of one of last year state volleyball matches.  In the clip she indicated to the board the length a player needs to jump serve and also the side court space needed to successful play a ball to return it to the court.

“One of the coaches has asked at conference meetings if there was any way we could not play in Milligan. The game of volleyball has changed so much. In the 80’s volleyball was a completely different game,” added White.

Several from the audience spoke in support of moving the volleyball matches to Exeter.

President Kuska commented, ”When we combined it was understood that the fall sports would be played in Milligan and the winter sports in Exeter.  The intent with the merger was that we would support both towns.”

The board held a lengthy discussion on the matter weighing the pros and cons. Board member Adam Erdkamp added, “You aren’t going to please everyone.  What the board has to look at is what is best for the students. . . I don’t care where we play, Exeter or Milligan.  We need to provide the best opportunity for our students.”

The board turned the discussion to making some changes in Milligan to make it more appealing.  Kuska indicated that the building committee could look at the facility in Milligan and make recommendations. “We can make some changes that can improve the quality.”

Board member Kendra Oldehoeft noted, “We talk about spending our money wisely.  We can’t ask the teachers to budget and then spend money for three home volleyball games.”

Board member Eric Milton added, “When we spent that $400,000 (on the addition in Exeter) we said we weren’t doing it to move everything here.  The padding is a no brainer even for PE.  I’d be against moving it at this time."

Kuska asked the building committee to look into the facility and come back to the board with some recommendations at the next meeting.  “We need to make it safe for the students that are using it on a daily basis.”

The next meeting was set for Tuesday, June 12 at 8 p.m. in Milligan