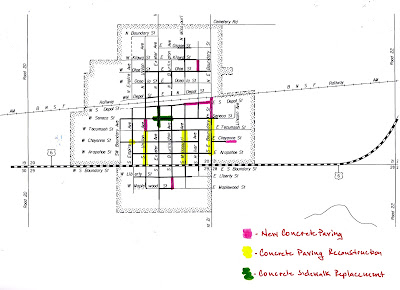 The Exeter Village Board met on Tuesday, November 8 at the new community classroom at Exeter-Milligan school.

The board first addressed a request from Paul Jensen for a zoning change.  The county zoning board recommended the change from industrial to commercial for the property Jensen recently purchased on East Boundary. The board approved the zoning change.

Steve Parr from JEO reviewed a packet of possible road and infrastructure projects with the board including paving several blocks, redoing the paving on several blocks and new light fixtures downtown.  The board also looked at a project to replace the aging water main lines downtown.
In discussing the downtown area, Parr noted that, “Usually when we tear everything out we replace the service lines to the businesses in the area.”

When discussing the street paving projects, the board noted several options for continuing a street project.  If 60 percent of the adjacent property owners are for the project then a street improvement district can be formed and the paving can be done. Also, the village has the option to pave any unpaved street off of a paved intersection.

In looking at the maps Village Board Chairman Alan Michl said, “I hate to say it but those streets have to be done but we need to keep improvements going.”

He added, “We definitely need to do main street and the street repairs. We can make plans to do the street paving after we talk to JEO and Ameritas about finances.”

Board Vice Chairman Tim Wilbeck agreed, “I think we need to pursue this. Let’s start doing it.”

The estimated cost for the sidewalk, lighting and water main project downtown are around $650,000. The village would secure bonds to pay for the project and these bonds would replace other street repair bonds that will be paid off in 2019.  There would be no additional cost to taxpayers as the village would just pay the interest on the new bond until 2019 and then begin to pay principal.

The board moved on to some maintenance issues including a problem with termites at the Senior Center.  The board noted that the agreement with the senior center includes the village taking care of the upkeep and pest control at the senior center.

Exeter Village Clerk pointed out the most recent fiscal year review and the expense report which shows the village had very less than $600 overage.

Maintenance Supervisor John Mueller started his report with the options for the mold abatement post inspections at the village office. The board opted to pay for all of the air quality tests.

Mueller presented the board with some tractor brochures and the board decided to review them and table a decision until the next meeting.  Mueller also reported that the soft start switches at the lift station were going bad and it will cost $1600 to replace them.

Mueller and Board Member Justin Harre updated the board on the ballfield progress.  The sprinklers were projected to be done at the end of the week.  The new surface was slated for the next week.  Michl and Wilbeck thought it had been more than 30 years since anything had been done to the ballfield.

Michl broached the question of building a new village office, “Should we proceed to see what it would cost to build across the street? I have been approached by several people who are interested in the current offices.”

Michl noted that there are grants available and some would take into account the investment the village made removing the tag factory.

Harre commented, “This is a good time to look into it because of all the problems we are having with the current building.”

Clerk Becky Erdkamp noted that sales tax for August was $10,673.43 and Keno for September was $257.74.  She reminded the board that the audit would be December 7.

The board set the next meeting for December 7 at 7 p.m.
Posted by Leesa Bartu at 2:06 PM