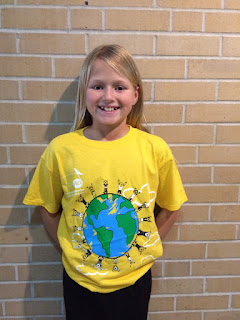 Jozie Kanode, daughter of Darth and Lisa Kanode, participated in the All-State Children's Choir under the direction of Sally Albrecht at the Lied Center on November 19.

The Exeter-Milligan music department, under the direction of Angie Murphy, has had a busy fall. Students in grades 7-12 have kept busy with pep band, honor group auditions and performances.  The 7-12 pep band played at eleven football and volleyball events this fall and have already played for two basketball games.  Several students have been selected for honor groups including Concordia Musical Arts Day Honor Band, Doane Fall Festival of Winds, UNK Honor Band, 8th Grade All-State Band and Doane Vocal Festival.  Students have also been completing auditions for additional honor bands and choirs.The band and choirs each performed at the Exeter-Milligan Veteran's Day program and the senior high choir additionally performed at the Milligan Legion Veteran's Day program and at Fairview Manor and Heritage Crossings.  The 7-12 students are currently working on music for their December 17 concert to be held at 7:00 p.m. in the Exeter site gymnasium.  This concert will feature the junior high choir, 7-12 jazz band, senior high choir, Friends of Vocal, and the 7-12 band.  The concert will end with the traditional "Christmas Sing Along."

The K-6 students have also had a busy fall. Many sang the National Anthem before a volleyball game in September.  Jozie Kanode (pictured) participated in the All-State Children's Choir in November. The elementary students put on a program called "North Pole Star" on December 1.   The students worked very hard and put on a great show attended by many family and community members.  They are currently learning new Christmas songs and doing various activities with the "Nutcracker Suite" including moving with scarves and illustrating a book.  Ten students have begun work on their music for Sing Around Nebraska which will be held in Central City on February 13.  Elementary band members have started to work on solos and small groups for the Bruning-Davenport Band Contests held on February 20 in Davenport.

The music department received a "Noteworthy" award for having 55% of the high school involved in the music department at the Nebraska Music Educator's Conference in November.  The plaque is hung in the Exeter classroom.  Everyone is looking forward to a great second semester with many students participating in honor groups, concerts, and contests.