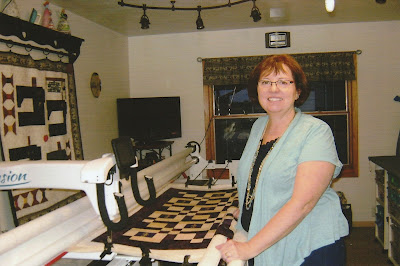 The GFWC Exeter Woman’s Club met September 15, 2015 at the rural Beaver Crossing
home of Diane Henke.  She presented a program on her quilt-making. which she started in 1987.  The club saw many of her finished creations  and enjoyed a tour of her home, including
her sewing and quilting room.  Diane explained how she used the long arm quilting machine
and gave a demonstration of her free-hand artistic ability.
Hostesses Agnes Loukota and Elaine Oldehoeft served refreshments before the meeting.
Club co-president Karen Chapman called the meeting to order.  The Pledge of Allegiance
and Club Collect were recited.  Club parliamentarian Judy Dinneen shared some tips from
Robert’s Rules of Order.  Sue DeJonge read the minutes of the previous meeting, which were
approved as read.  Sharon Mueller gave the treasurer’s report, audit report and took a silent
roll call.  Bills were presented by Agnes Loukota for Operation Smile and Orphan Grain Train
sewing supplies.
Corresponding secretary Patty DeMoss reported that 33 cards were sent on behalf of the
club.  She read a thank you from the Mitch Schlegelmilch family for the Arbor Day gifts.
Judy Dinneen reported on the Dist IV Workshop in Seward that she attended on July 18.
The club historian’s report is on file.
Unfinished business: a gift was presented to past president, Elaine Oldehoeft.  Elaine was
president of the club for three years.  Agnes showed a sample of the pillowcase dresses made
for Orphan Grain Train and the armbands for Operation Smile.
Karen thanked Cheryl Luzum and Josie Vela for watering the flowers downtown this
summer.  Members are also encouraged to enter the GFWC Creative Writing contest which
will be held November 4 in Seward.
New Business: Dist IV Convention will be held October 1 at the American Legion Hall in
Fairmont.  Karen Chapman, Bonnie Cudaback, Patty DeMoss, Kathy Due, Elaine Oldehoeft
and Reba Toothman plan to attend.  Our club will provide coffee cakes for registration and
baskets for the auction.
The Exeter Avenue Holiday Sampler will be October 3 at the Exeter American Legion Hall.
The club will be selling pie by the slice from 9:00 am - 2:00 pm.
Sharon distributed new fall catalogs from Cheerful House cards.
Our next meeting will be “Make A Difference Day” on October 20 at Agnes’s home at
1:30 pm.   Members please wear pink for breast cancer awareness.  Cookies will be taken to local Veterans and others in the community.  Hostesses will be Reba and Karen.
Sue DeJonge
Recording Secretary
Posted by Leesa Bartu at 9:37 AM