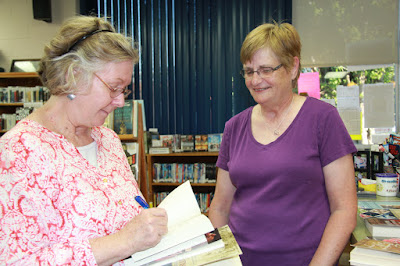 The evening of Wednesday June 3 found a small group in Fairmont eagerly awaiting the arrival of an author who has embraced Nebraska as her home and found her niche writing about the pioneering spirit of women in the state.

2014 marks Stephanie Grave Whitson’s 20th anniversary as a published novelist, “If you would have told me in 1994 that I would still be writing 20 years later I would have said ‘you’re nuts.’”

With more than 25 books to her credit Whitson has found her place in the Christian historical romance fictional market.  She started writing when a small group of graves in a cemetery near her rural home wouldn’t leave the train of her thoughts.

Her candid presentation to the audience at the Fairmont Public Library began with a description of her constant perusal of non-fiction and the inspiration she finds in history, “I am reading real history about women who lived in history that interested me.  There will be a bunny trail, something that will pop up and I will think, ‘Wow, what was that like for her.’  Or ‘What kind of woman would survive that?’ and then I continue to learn more and more about the real history.”

The majority of Whitson’s books are about Nebraska history, are well-researched and true to fact, but are entertaining as well, “The way it works for me is I put imaginary characters into real events.  The history that is in my books is as accurate and true as I know how to make it but the people are figments of my imagination.”

Whitson gave a background of her newest book “Daughter of the Regiment,” which immerses the reader into the world of the Civil War.  This book, while set in Missouri, reflects a trend that was quite often seen on both sides of the Civil War in which the commanders would bring along their wives or daughters to the camp and they would stay with the regiment and serve as cook, nurse and even so far as to serve alongside the men in battle.  “I always want to write books that are respectful of the real history and honor it and don’t take it lightly,” Whitson explained.

This fall her work will be seen in “Basket Brigade” a trilogy about the basket brigade of 1861 in Decatur, Il. .  Similar to the Nebraska phenomenon, the North Platte Canteen, the women of Decatur would receive a telegram of the number of wounded Civil War soldiers on a train and prepare baskets of food to be presented when the train stopped in Decatur.  Whitson tells one of three stories in the book based on a quote that she saw in the Illinois State Museum display on the basket brigade.
Whitson’s story follows the life and troubles of a young woman who places a note in the basket, trolling for a young single man as she advertises herself as young and single with lots of blond hair.

Her visit to Fairmont came out of one of her “bunny trails.”  In 1978 while visiting the Nebraska History Museum Whitson noticed a quilt on the outside of the sod house replica in the museum and became intrigued when she read the backstory of the quilt.

The quilt was made by the daughters of Mattie and Uriah Oblinger from the maternity dresses Mattie wore before she died in childbirth.  That information triggered research on Whitson’s part leading her to a vast storehouse of letters and photos of the Oblinger family who homesteaded in Fillmore County.

“It’s a very rich archive because we don’t have a lot of letters. They just weren’t kept and the actual letters and a lot of the photographs from the family are housed in the archives in Lincoln.  It was a big thrill for me to ask for Urriah’s papers and see the actual letters of these people who homesteaded in Fillmore County in 1872.  What is unique about their story to me is that they were very deeply in love and they talk about how they feel about each other in their letters. It has always fascinated me this one family is such a microcosm.  They spanned from the Civil War until Uriah’s youngest daughter who was involved in vaudeville and drove a taxi cab in Washington DC during World War II,” Whitson explained.

During her research on this family, which has now spanned over three decades, Whitson could never found the location of Mattie’s grave until she contacted Fairmont Librarian Wanda Marget.
Marget found the cemetery and grave at the Fairview Cemetery west of Fairmont.  Marget and Whitson toured the cemetery taking pictures of all of the gravestones and then toured the ground where the Oblinger family had homesteaded along with the land where Mattie’s brothers, Giles and Samuel Thomas homsteaded.

Whitson had shared some of the Oblinger’s family history in her book, “Home on the Plains: Quilts and the Sod House Experience,” but is dabbling with expanding it into a book based on their life and love story.

Currently Whitson is immersed in writing a book about the Pony Express station store by Fort Kearney and the audience presented yet another “bunny trail” for her to follow.  They brought up the Oak Grove Pony Express station in Oak, Neb. and the massacre which occurred there in 1864.  Whitson noted that so much of the Pony Express history is conflicting and not well documented but was very interested in this event.

Learning about the trials of pioneering women in Nebraska has helped ground Whitson when she has felt overwhelmed with the struggles facing her own family, “Learning about the past gives me my own perspective for today.  Learning about those women’s stories just amazes me.  I used to think I was a pretty hardy person but the more I learned about these women.  I know I couldn’t do it.”
Whitson graciously visited with the crowd at Fairmont while autographing copies of her books.