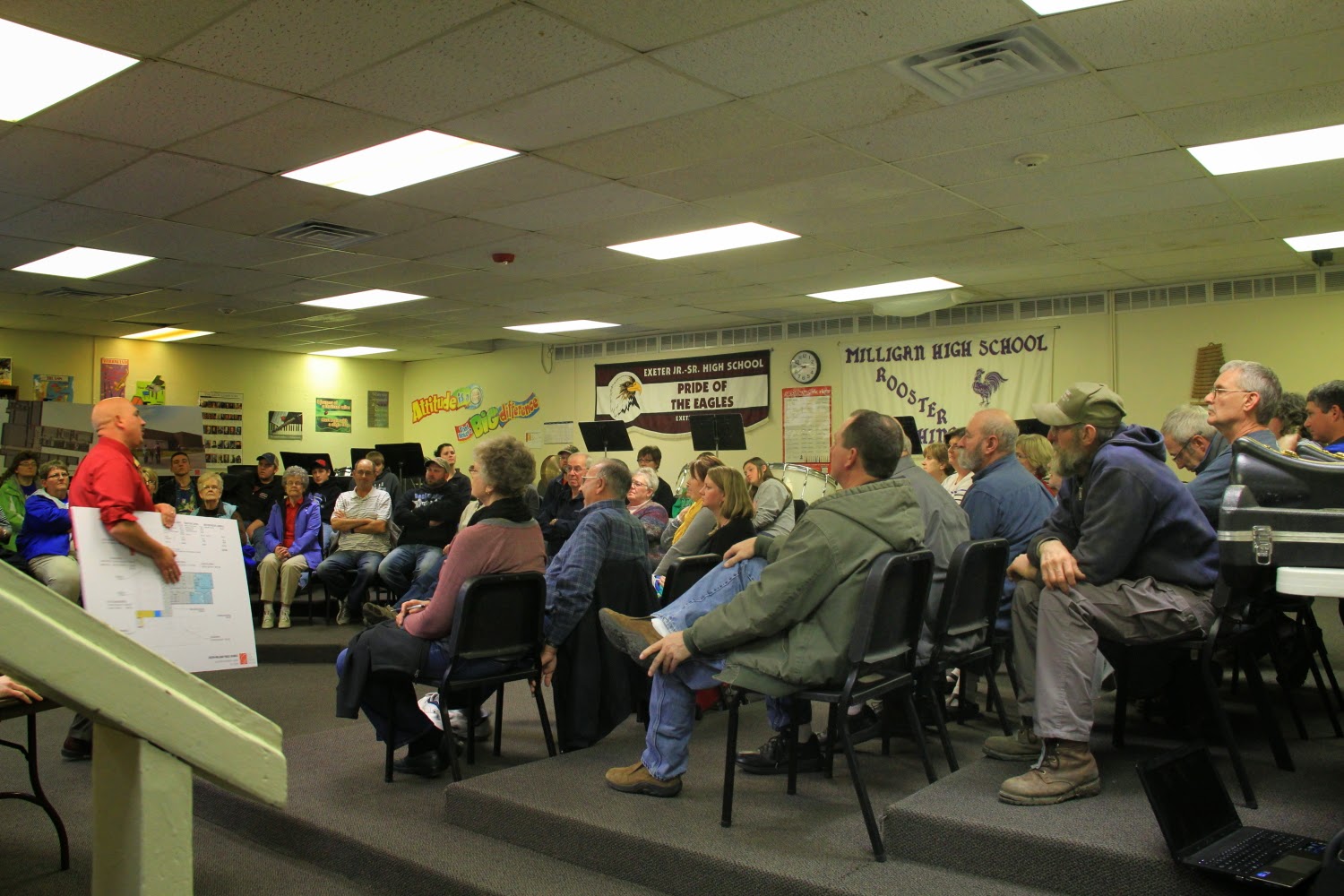 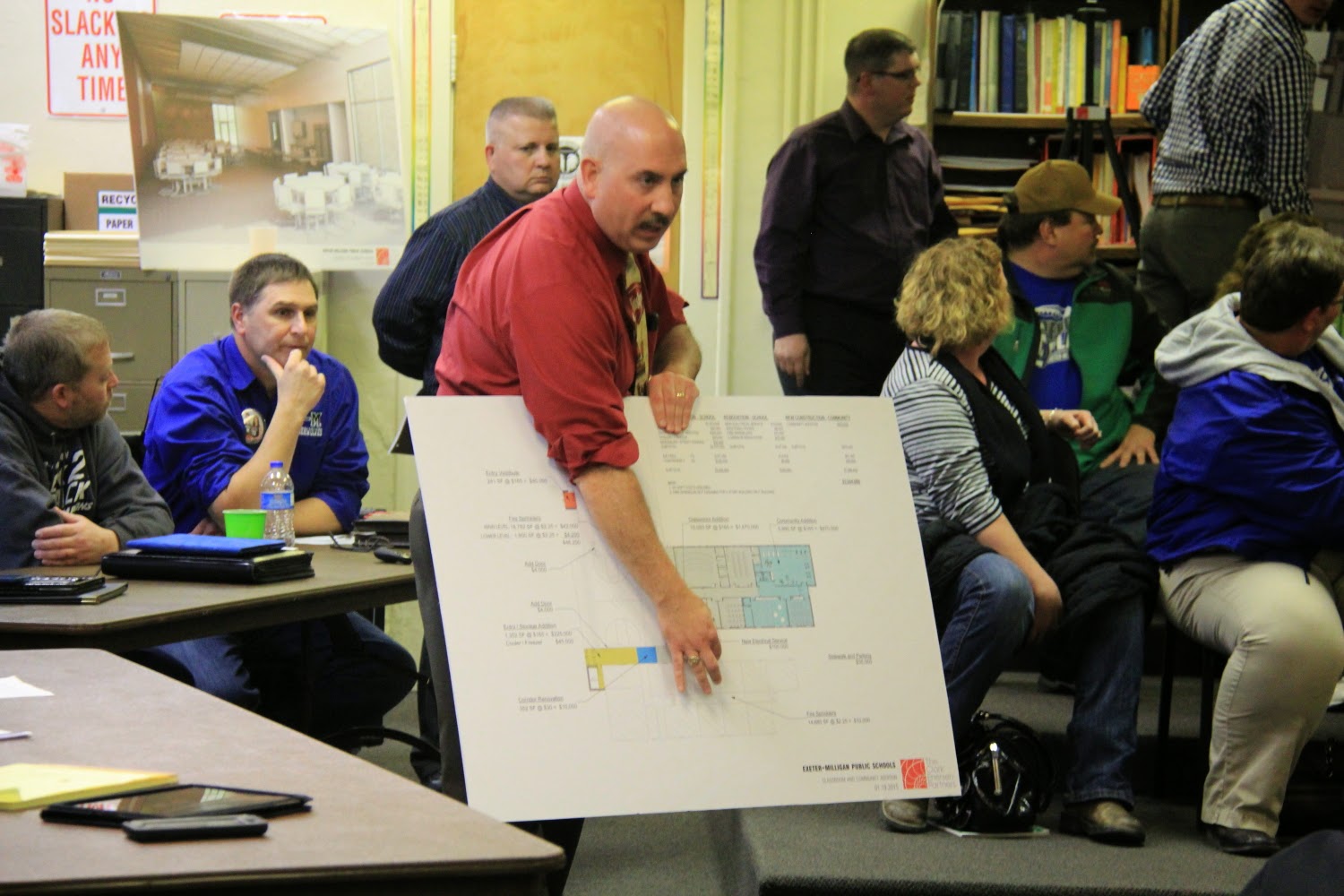 Superintedent Paul Sheffield (front) points out the existing elementary classrooms on a board with the new addition.  Behind him from the left are school board members Jim Zeleny and Tim Pribyl along with Clark Enerson Partners Architect Tim Ripp and audience members.

The Exeter-Milligan School Board held a special meeting on Monday, January 19th to present to the community their current plans for a school addition.

The audience of close to 50 district patrons were given a power point presentation by Superintendent Paul Sheffield that outlined the priorities needed, the costs and payment plans for the project, and the proposed building plans.

Wish lists that the board pooled from district employees, community members and government regulations included moving all of the classroom space out of the basement, a new community weight room and classroom, life and safety updates (sprinklers) along with a new preschool area to meet square footage requirements.

All of the items were included in the plans which would be academically based with a new band/music room, art room, community classroom, preschool space, and Spanish classroom but added were a concession area along with a commons area behind the current stage, a new kitchen storage area between the kitchen and the south side of the gym and two new breezeway entrances into the gym (the current main entrance would be remodeled to make it a true breezeway and an entrance on the south end of the gym would be added as well).

Sheffield next presented the payment options for the project that is estimated to cost $3.25 million.    Of that total the community area – including the fitness room, the classroom and the preschool room are expected to cost $1.5 million and the E-M school classroom area is expected to cost $1.25 million. The rest of the costs would be accrued in a new electrical room and the concession and commons area that will connect the addition to the existing building.

Funding options will include the Joint Public Agency (JPA) funds that have already been collected through property tax.  Currently, Sheffield noted, the JPA account has $500,000 in it.  These funds must be used to pay off bonds that are issued for a community building project and they plan to take out $1.5 million in bonds to pay for the project.

Architects Tim Ripp, Adam Post and Pat Capek from the firm Clark Enerson Partners were on hand to offer detailed information on the 16,000 square foot project.  They presented both a power point visual of the planned project and shared drawings for the audience to examine.  The architects also took audience questions about the project.  The architects pointed out that the community space would be able to be closed off from the rest of the school so that it could be used during the day by the community without interfering with students.

Sheffield noted that a year-long fitness pass for community members will be $72 for a single person and $120 for a family.

One of the concerns expressed by audience members was the lack of a theatre and no additional seating in the gym.  There was quite a bit of discussion on the gym seating and one of the options that was presented was the additional entrance on the south side of the gym.  Sheffield noted, “We hope that we can bring the visitors into the gym on that side so that they will sit on the visitors side instead of sitting in the gym right when they come in the way they do now.  Putting in new bleachers would reduce our seating capacity by 75-100 because of ADA compliance.”

Another concern of the audience was the Milligan school site.  Sheffield explained, “Right now we have not addressed putting money into the Milligan building. . .we are committed to keeping a presence in both communities.”

Sheffield noted that part of the motivation in removing the students from the basement of the current building is a safety issue. “It is a 100 year old building.  We have had ceiling come down, we’ve had water and sewer issues.  This room (the band room) along with the rest of the building is not ADA compliant.  This would be the first step in becoming ADA compliant.”

The audience asked what would happen to the empty basement and Sheffield noted it would most likely be used for storage.  “The current kitchen storage right next to the gym would become PE storage.  We currently have a PE grant and we have gotten a lot of equipment with the grant.  It would be so much more convenient for Darcy to have storage here rather than under the stage.”

Family Consumer Science teacher Mary Lou Vossler commented, “I have two children who graduated from here.  Our education world is a lot different today that it was when I was in school, our needs our different.  Square footage is different and we have more regulations to follow.  This addition is a great thing for our school plus we have something for the community to use.  How awesome is that. . . we have to look to the future and invest like other generations did for us unless we want to be trucking down the road 20 miles and have no say in what happens.”

Brian Murphy, History teacher and coach also spoke, “Ultimately the final question is, is it going to better for our kids’ education? Yes.  It’s been two or three years in the making, let’s get this done.  Is it worth $3.5 million? Yes!  We have skipped 40 years of doing anything to this building and we are basically
[going to be] paying .04 [over 4 or 5 years,] so we need to do something.  We got out of it for too long.”

Board member Adam Erdkamp added, “This project is a stepping stone.  Let’s do something we can make a big impact with.  If we finish this and our population levels out we can go on to the next step.  I think we have to think about the kids we have here now and give them the best experience we can.  That’s what our goal is with this project.”

School board president Sharon Kuska closed the meeting stating, “We have to make the best of what we have available and make sure there is a future here for them.” 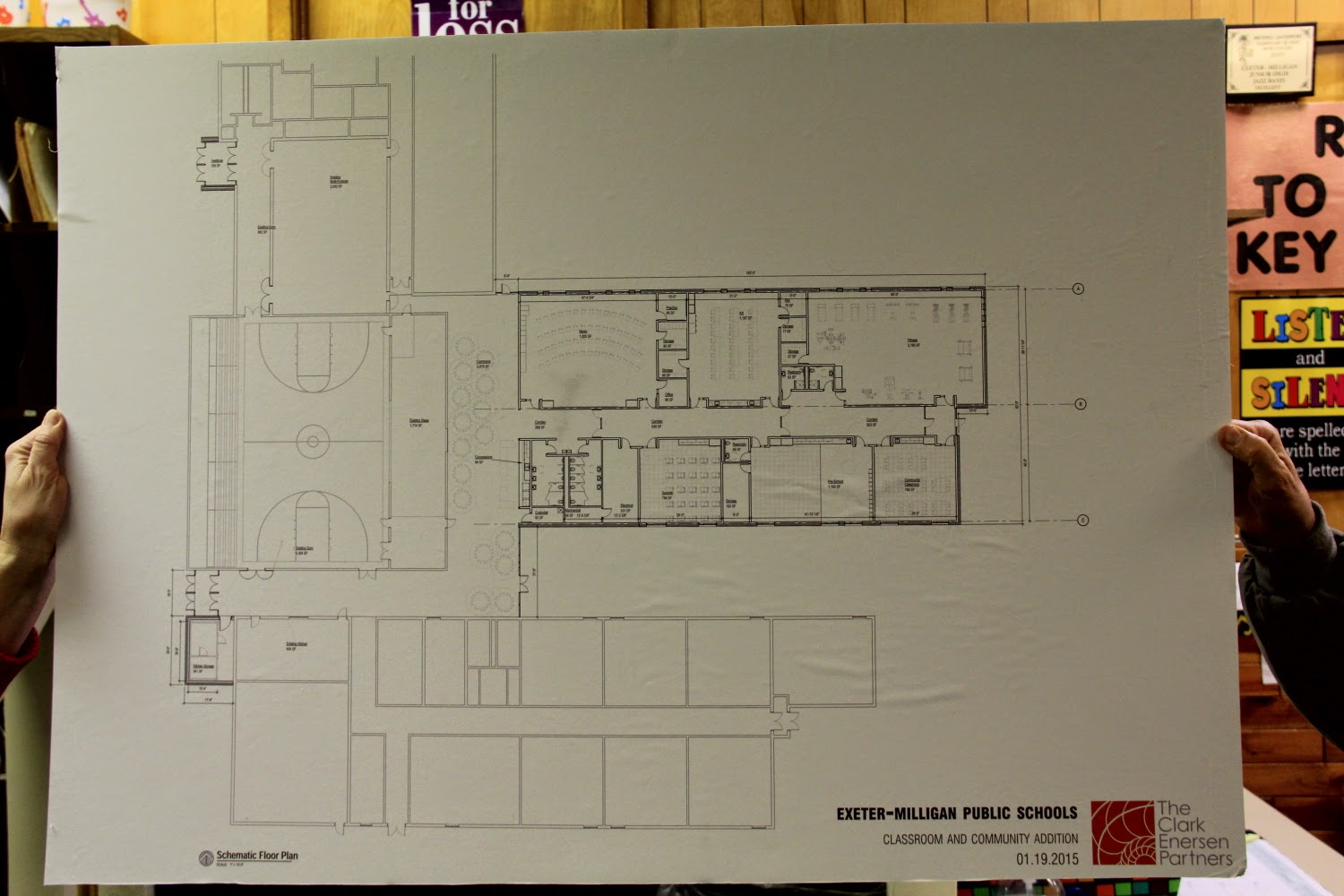