The Board advertised that they would be discussing the current roads projects that the county is considering placing on the ballot in November.

Four paving projects were discussed including Road 24 which connects Highway 6 to Highway 41 commonly known as the “Milligan Road,” a road into Fairmont from Highway 81 just south of the Casey’s store, a project out of Grafton headed north and a road out of Shickley to the south that meets a gravel road in Thayer County.

Chairman Larry Cerney opened the meeting and welcomed the guests before he invited Supervisor Bob Mueller to moderate the meeting.

Mueller opened by reviewing the handouts that were made available to the public.  The handouts covered the cost estimates for each project in both concrete and asphalt, the total county valuation, levy information, bond information along with a table showing current land values and the amount of taxes the projects would add to the property owners.

After the handouts were reviewed Mueller turned the floor over to Ameritas representative Brad Slaughter who discussed the bond percentage rates and the impact this would have on the residents of Fillmore County.

Slaughter addressed several concerns about property values.  Several in the crowd asked what would happen if property values decreased.  “Currently Fillmore County is operating at a .21 cent levy but they are constitutionally allowed to go as high as .50 cents. If valuation would decrease then the levy asking would increase to make the same dollar payment.”

Mueller commented, “County valuation goes down and with the price of corn the way it is that is likely.  We still have to make the same payments.  In the instance that farmland would go in half, that would put more tax pressures on the residential landowners.”

Slaughter estimated that the county currently has 1.5 million debt in bonds.

County Resident Susan Johnson, who ran unopposed for the county supervisor board in the 2013 primary election, spoke about a petition that had been signed in 2012 by over 600 residents asking the board to pave the Milligan Road, “I was told the board would take it under consideration.”

Mueller responded, “Not all of the signatures were valid on the petition.  We didn’t think people in the whole county would vote for one road.  It makes a lot of difference to our school and our communities (Exeter-Milligan) but not for the whole county.   To be fair we added Grafton and Shickley so the whole county can get some good out of it.”

Mueller continued, “What we need at the end of tonight is for people to give us a hand vote if they are in favor or not in favor of the project.  If there is enough support for the project we will see about putting it on the ballot.”

It was asked if there would be any advantage to doing the projects at the same time and Slaughter responded that bonding at once with a low interest rate could save the county $300,000 - $400,000.
The question of federal funding options was raised but several board members were negative about that and Ameritas representative Slaughter noted that Fillmore County operates with one of the lowest levy’s in the state making it unlikely they would be a candidate for any federal assistance.

County Supervisor Merle Noel  broached the subject of putting more crushed rock on the roads.  Road 24 has been rocked along with the Burress road as those two roads have heavy semi traffic regularly.

“The county has seen a significant gravel savings on the Burress road.  I’ve done some rough figures and on a mass scale we could spend half of what we want to pave these 18 miles of roads and put crushed rock on 400 miles of roads,” explained Noel.

One of the owners of Harre Feed Yard located on Road 24, Wade Harre, questioned, “What are the costs to keep the Milligan road going every day?  You spend a lot of money on that road any day.  If you aren’t rockin’ you’re grading.  It’s costing you a lot of money to keep it NOT paved, too!”

Road 24 resident, Kate Harre noted, “This is the most traveled road in Fillmore County that is not paved.  It’s fast and it’s busy and you know that.”

Kim Slezak, of Milligan, commented on the benefits paving would bring to the small town, “Paving the road would bring money and business into Milligan and not just benefit the people who live on Road 24.”

Exeter-Milligan Superintendent Paul Sheffield questioned the Supervisor’s purpose in having the meeting if they weren’t for the projects.  Mueller responded, “We wanted the people to get the information on what the projects will cost.”

Supervisor Noel commented “Semi’s are filling the ditches.  If we don’t do something to save the vast majority of our roads, $25 million won’t be enough.”

The consensus of the Board was that they would not think about spending that much money without a vote.  They surveyed by a hand count those in attendance who were interested in the Grafton project and had no one present, the Shickley project had one interested party, Fairmont had four or five and there were over 40 present to hear about the Road 24 project.

A hand count of pro and cons found over 35 for the Road 24 project, the Board closed the meeting noting that they would considering putting the project on the ballot. 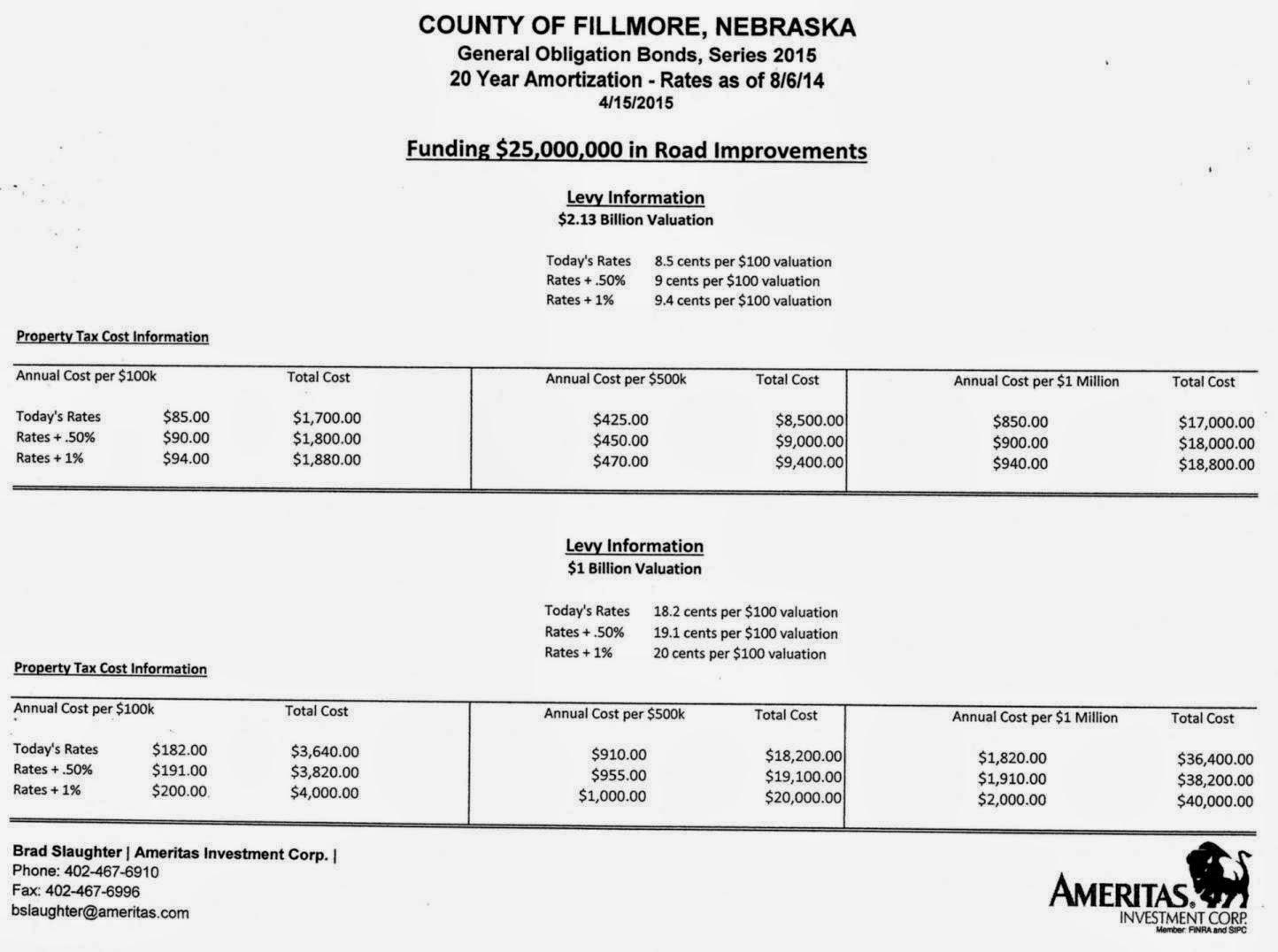 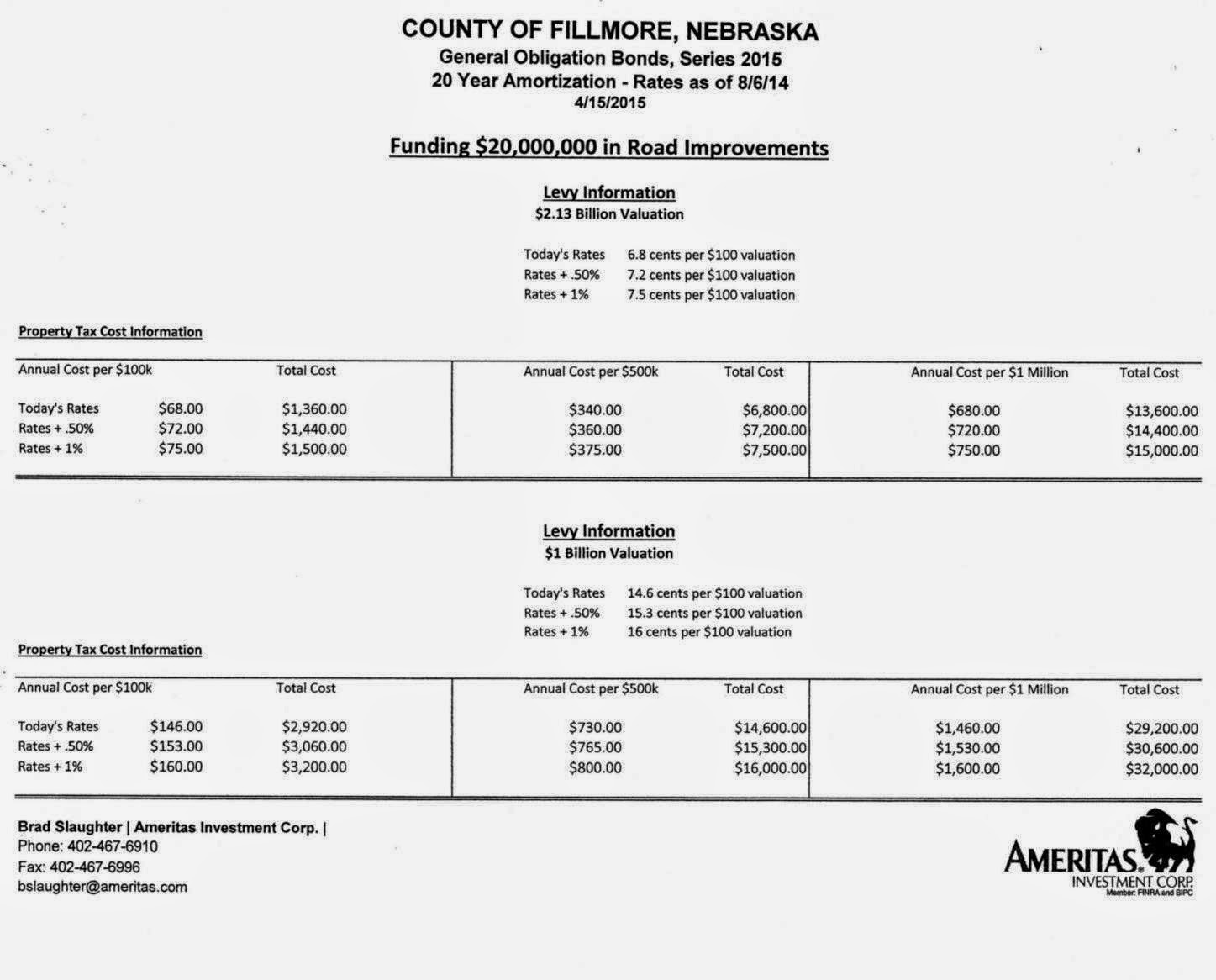 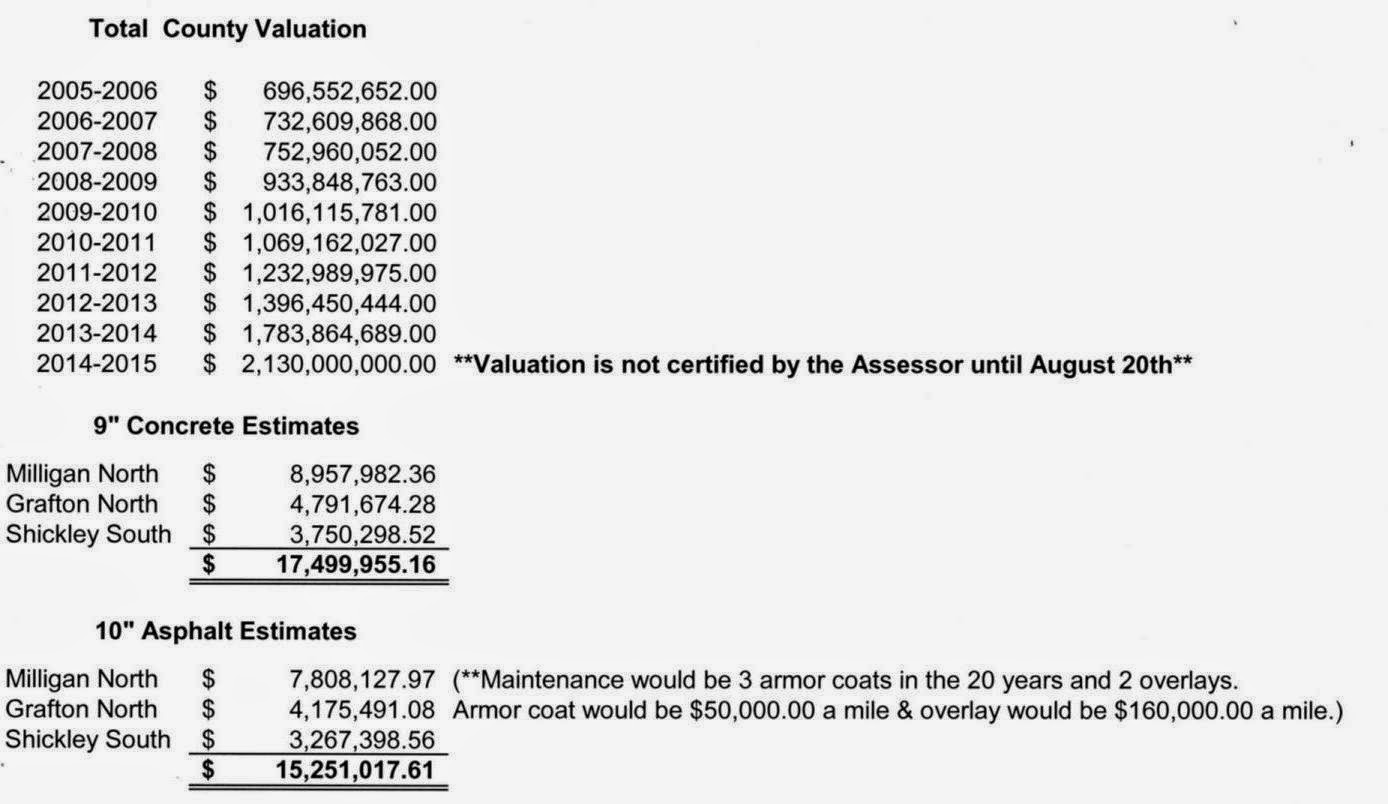 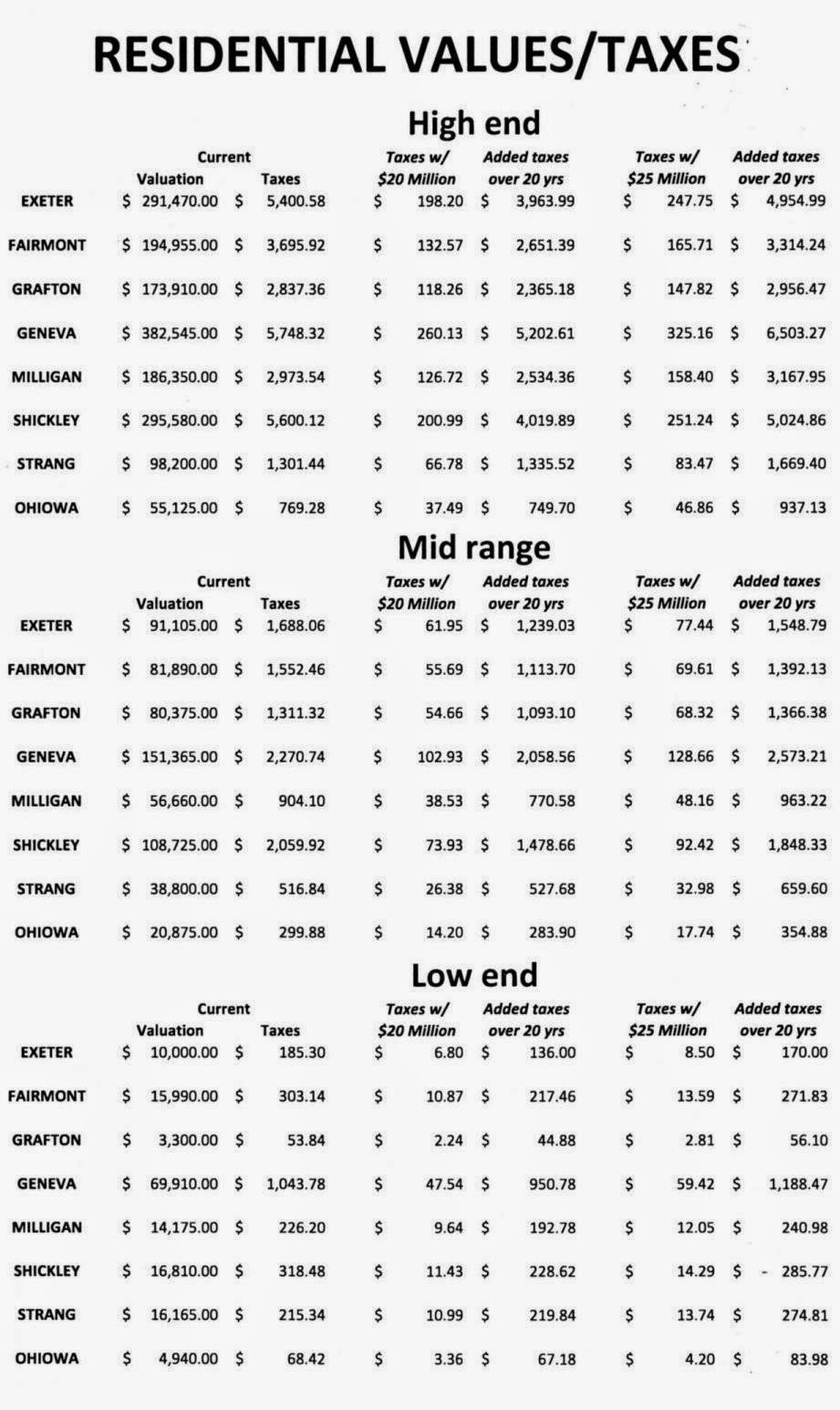 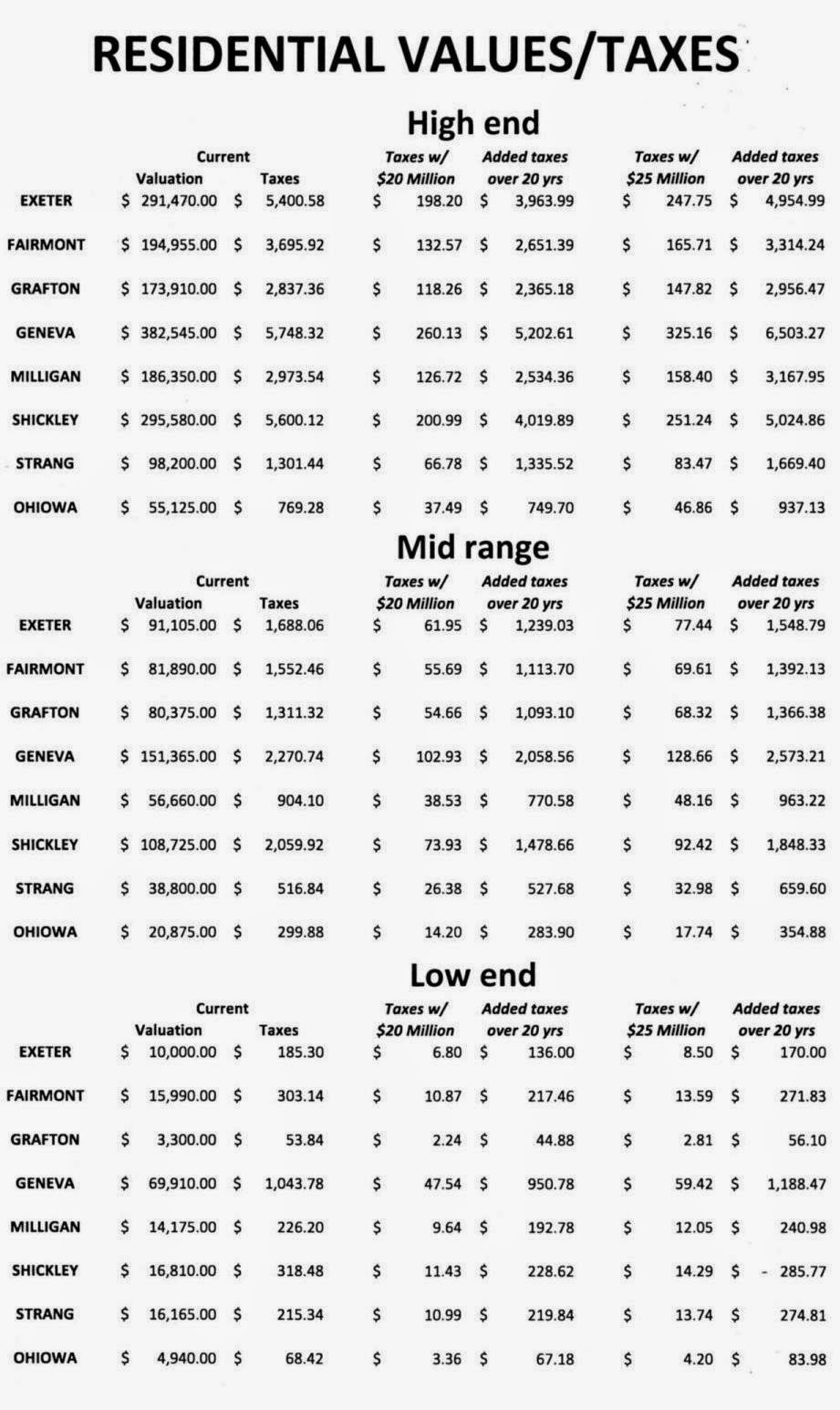 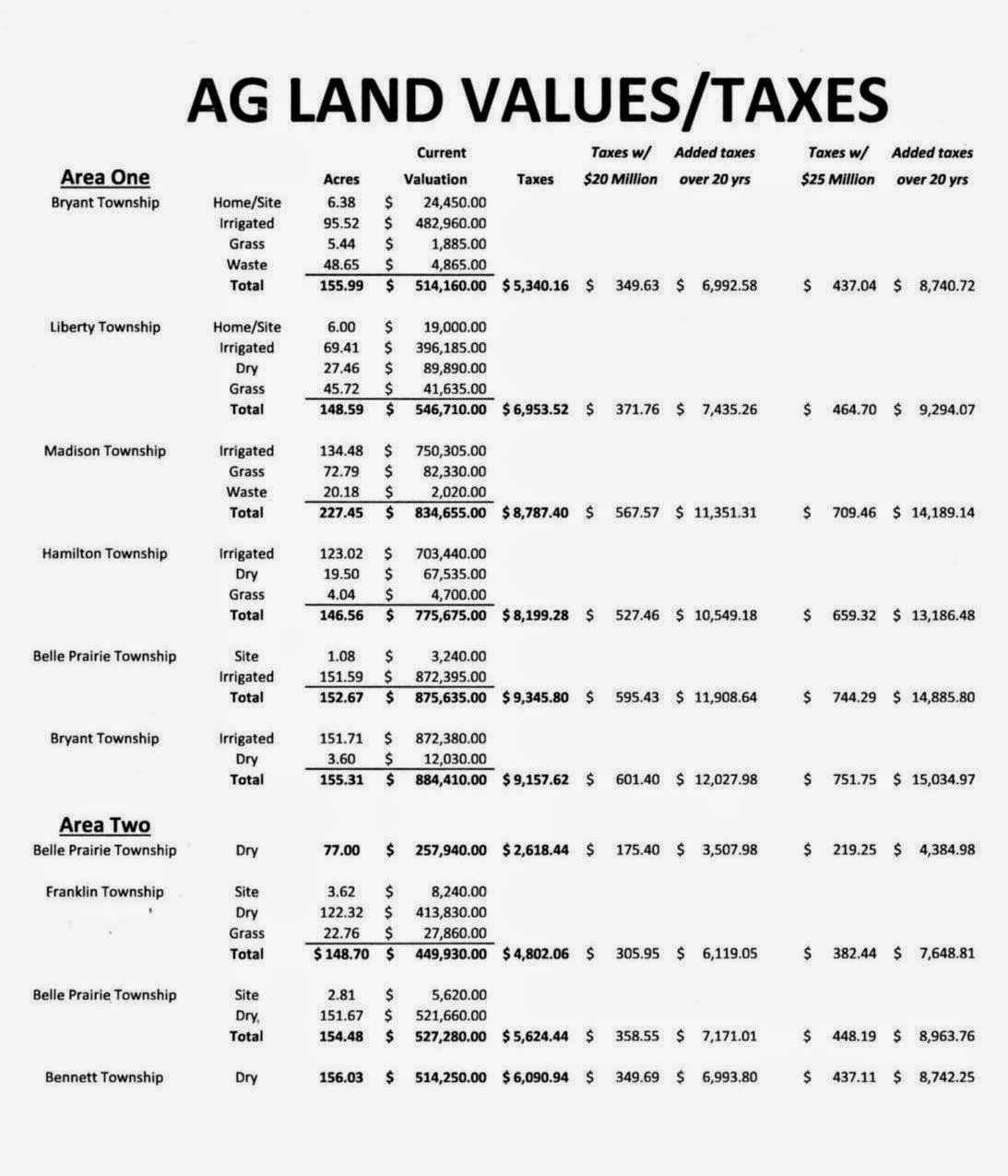