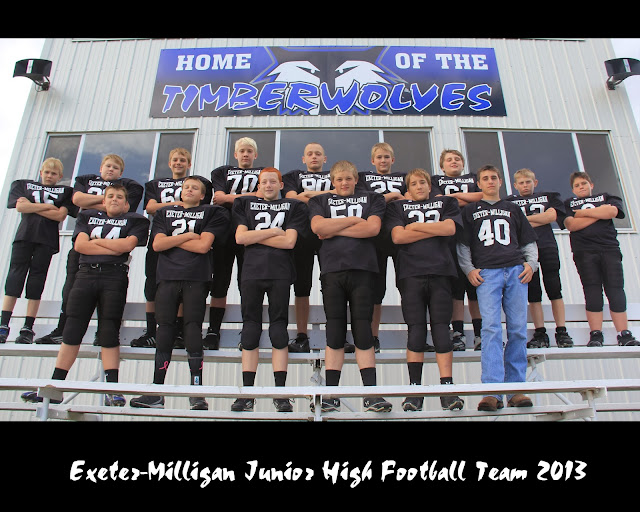 The Exeter-Milligan junior high football team recently completed their 2013 season.
Five of the six games were played in Milligan. The team was slowed by injuries
throughout the season. The EM team finished with a 1-5 record.
On September 9, Exeter-Milligan hosted McCool Junction. The EM junior high came up
on the short end of the 24-36 final score. Scoring touchdowns for EM were Colton
Boassaller on a 20 yard run, Bossaller again on a 52 yard kick-off return, and Joey
Bartu on a 2 yard run. Two point conversions were all converted on passes: Eric Olsen
to Patrick Murphy, Seth Maxson to Murphy, and Maxson to Spencer Pribyl. Bossaller
had a fumble recovery for the EM defense.
Exeter-Milligan hosted East Butler on September 17. The EM offense had a tough time
getting anything going in the game. The strong East Butler team soundly defeated the
EM team 0-84.
Exeter-Milligan was again home on September 23, hosting Friend. The junior
Timberwolves were again held scoreless in the 0-22 loss. However, the defense played
much better than the previous week. The EM defense was led by linebackers Joey
Bartu and Derek Axline.
On September 30, Hampton traveled to Milligan to take on Exeter-Milligan. The game
was close throughout. When the clock showed zeros, EM came out on top, by a 24-22
margin. Patrick Murphy caught a 2 yard TD pass from Eric Olsen, Joey Bartu scored on
20 and 28 yard runs. The Exeter-Milligan defense recovered four Hampton fumbles:
Joel Klemm, Derek Axline, and two by Olsen. One of Olsen’s recoveries was returned
30 yards for a TD.
The junior Timberwolves traveled to Henderson on October 7 to play Heartland. EM
came up on the short end of a 6-52 score. The lone score for EM came on a 20 yard
TD pass from Eric Olsen to Patrick Murphy. On the EM defense, Joey Bartu had a
fumble recovery and an interception.
Exeter-Milligan wrapped up the season on a wet Monday, hosting Deshler. The October
14 game score ended: EM 8, Deshler 56. Eric Olsen hit Derek Axline on a 15 yard
center eligible touchdown pass play late in the game for EM. Patrick Murphy ran in the
2-point conversion. Joey Bartu had two fumble recoveries, while Axline added another fumble recovery.
Posted by Leesa Bartu at 7:30 AM