Brock Steuben surrounded by the plaques he has won just this racing season. 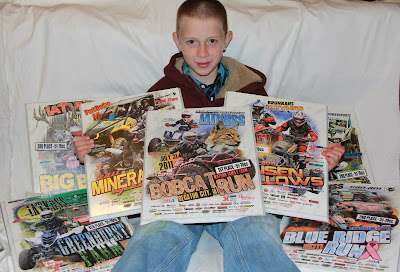 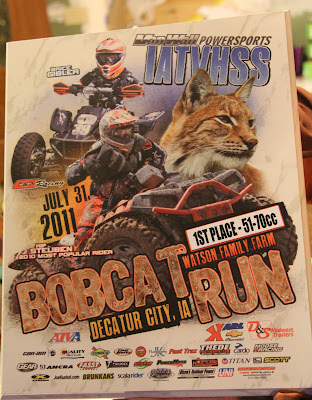 One of this year's racing plaques with the picture of the 2010 Most Popular Rider Kip Steuben shown. 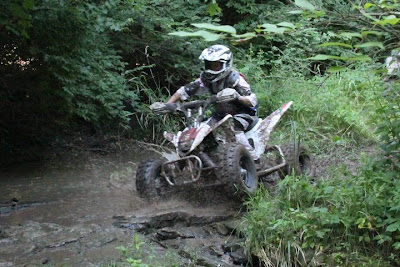 Bailey Steuben races her way through an off-road course during an IHS race. 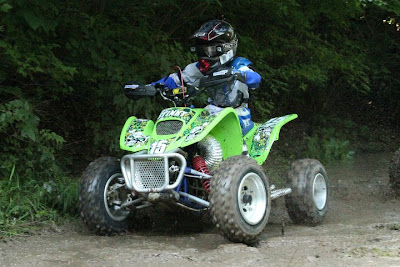 Brock Steuben races his way through an off-road course during an IHS race.
When the Kip and Laura Steuben family of MIlligan began riding their four wheelers at local motocross courses as a hobby little did they know where their hobby would take them.

They met other quad fans and from them learned about the Iowa Hare Scramble Series. In 2008 they took the plunge and got serious about their hobby, joining the IHSS along with their three children.

In the IHSS there are seven races in a series which are held all over Iowa from April until October. “We race once each month over a weekend with each month at a different location which is all private land that the series has worked out permission to use it, “according to Laura.

All of the family members race in a variety of events. The kids race 70cc and 90cc quads on three mile through trees, terrain and fields for about 45 minutes. The adults average about 6 miles with a two hour race. According to Laura, “It’s a lot harder than it looks. There are a lot of hills and creek crossing. It’s not uncommon to hit trees.”
This year, the youngest Steuben, Brock, a third grader at Exeter-Milligan, won the Series Championship in his class.

Brock races a 70 production class four-wheeler and had three first place finishes this year in the seven races. He placed in every race which gave him the points lead for the championship. He will receive his championship hardware in January at the IHSS banquet.

Sister Bailey, a seventh grader at Exeter-Milligan, also races and placed fourth in her division this year. She races in the 90 cc division. In 2009 Kip and Laura won the UTV limited championship. In 2009 Brock won the peer voted on most popular youth rider and his picture was featured on the 2010 award plaques. In 2010 Kip was voted the most popular rider and many of Brock’s plaques feature his Dad’s photo.

It has become so much more to the Steuben’s than just a hobby, they have extended their family to include many of the other race families, “It is an expensive hobby but for us this is our family thing. We don’t do a big vacation so it’s like seven mini-vacations throughout the year where we get to camp and race.”

The Steuben's have sponsors and feature some of their logos on their equipment. But more important to Brock, it’s about, “Just racing, having fun.”

This year his favorite course, “was the last, Carlisle, Iowa. The track is fast and wide. I would rather run fast than go through rough terrain,” explained Brock. Next year Brock will move up to the 90cc production class. He nodded when asked if he needed a little more challenge. His brother, Blake, a fifth grader at Exeter-Milligan took a break from racing after the first race but plans on reentering the series next year.

Laura claims, “I love to watch the race but I don’t. There are some things that happen out there that I’m glad I don’t see.” Of course, everyone wears protective gear which includes helmet, chest protector, boots, gloves, neck brace (not required), and long socks, but according to Brock, “There are dangers, the bumps can flip you off and you can get hurt.”
Posted by Leesa Bartu at 8:25 AM