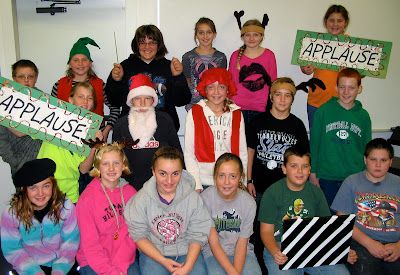 The Exeter-Milligan sixth grade class has been busy preparing for this year's program called "This Is Your Life, Santa Claus!"  The concert will be held on Tuesday, December 6, at 7:00 p.m. in the Exeter site gymnasium.  All elementary students will be performing during the concert, beginning with the fifth and sixth grade bands.  They will be followed by the kindergarten, first, and second grade classes.  The musical will end the evening. It will feature the third, fourth, and fifth grade classes each on their own song.  The sixth grade students have all of the character parts and even a few solos.  Many sixth grade students also have additional duties in the production of the show.  Piano solos will begin the evening at around 6:35. Please mark your calendars now and join us for an evening of fun music!

December 5 - The Exeter Women's Club will be sponsoring the "Christmas fun for Kids" on Saturday Dec. 5th 9-12.