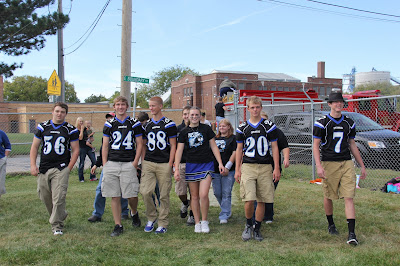 Exeter-Milligan Seniors Rode to the pep rally on the fire truck and walked in together. 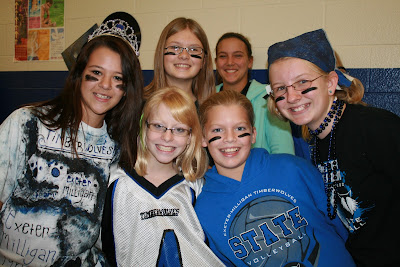 The Exeter-Milligan Junior High girls got into the spirit of "Spirit Day".  Front row from the left are Kaitlyn Clift, Joan Strate, Lucy Murphy and Sam Horne.  Back row are Ella Wilkins (left) and Sydney Hall (right).
Exeter-Milligan students enjoyed a week of "Kicking It Old School" for their 2011 Homecoming celebration.
Each day was a different dress-up theme with Pajama Day starting off on Monday.  On Tuesday, each class, along with the faculty was assigned a different decated starting with the 40's.  Wednesday each class was assigned a different color to wear and Thursday was Sports Throw Back Day that sported plented of Milligan Rooster purple and Exeter Eagle outfit's.
Everyone got into the theme of Friday's Spirit Day and family and friends attended the pep rally held at the Exeter site football field.  The Cheerleaders had games for the senior girls and boys to play and then the faculty led a cheer. The Exeter-Milligan band played and several of the seniors spoke to the crowd.  The Cheerleaders performed a dance routine to pump up the crowd before school dismissed.
After the Timberwolves defeated the Meridian Mustangs 60-8 behind the strong defense of Nate Bigelow, Nolan White and Kyle Jensen.  The Timberwolves scored 30 points during the first quarter with James Sluka scoring two touchdowns, Robbie Androyna, Nolan White and Derek Luzum each scoring one apiece.  Sluka scored another touchdown bringing the score to 52-0 before the Mustangs placed 8 on the board. The final score was a 48 yard run by Jensen.
After the game the Homecoming court was crowned.  Attendants from the freshman class were Madison Horne and Kyle Jensen.  Sophomore class attendants were Brooke Manning and Garrett Pribyl with Taylor Erdkamp and Jacob Kroll representing the junior class.   Becca Vossler and Blake Mark were crowned Duke and Duchess, with Lana Kennedy and Jalen Maxson named Prince and Princess. Claire White and Nate Bigelow were crowned the Exeter-Milligan 2011 Homecoming King and Queen.  They were presented gifts from the student body by Quinten Loontjer before pictures and heading to the dance.
DON'T MISS THE SLIDESHOW WITH MORE ATTENDANTS PICTURES AND PICTURES FROM THE FOOTBALL GAME>>>>>>>>>>>>>>>>>>>>>>>>>>>>>>>>>>
Posted by Leesa Bartu at 9:54 PM