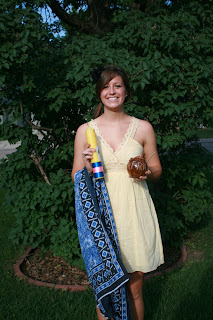 Kayla Becker shows some of her souvenirs from her visit to Tanzania.  She holds a candle and a coconut sugar bowl along with a piece of cloth which the natives used for everything from a garment to a carrying bag.  Sugar cane is one of the primary crops and one that Becker enjoyed at every opportunity. 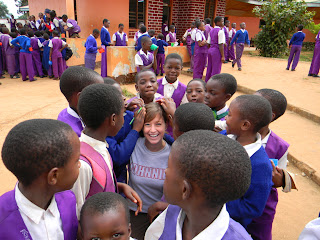 Kayla Becker sits in the middle of a crowd of Tanzanian school children who were fascinated with her long hair. 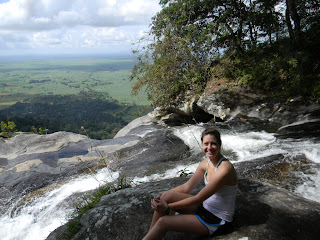 Kayla Becker climbed to the top of the Sanje Waterfall which is tallest waterfall in Udzungwa Mountains National Park. 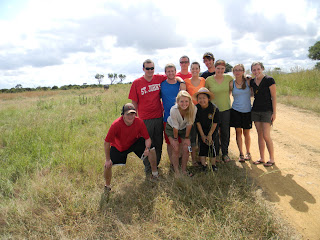 Kayla Becker (middle row third from the left) with her group from St. Benedict and St. John's in Tanzania.


Kayla Becke, a College of St. Benedict student and Exeter native recently returned from a service and immersion trip to Tanzania and Zanzibar.

The trip was sponsored by the joint campus ministry group from the College of St. Benedict and St. John’s University.

Prior to the trip Becker was unable to attend many of the group meetings and planning sessions because of her school and work schedule so she started the trip not knowing any of the other nine participants or their leader very well but ended with a lifetime of wonderful experiences.

The group started their trip in Dar es Salaam which is the largest city in Tanzania. There they met their driver for the trip, Good Luck, who Becker said “was a godsend for the entire trip.”

Their first adventure was a bus ride to the tiny town of Hanga where their group leader had previously spent nine months teaching school. The bus ride on the only paved road in Tanzania was normally an eight hour trip ended up taking them 17 grueling hours.  During their travels they passed by the Mikumi National Park getting their first glimpse of roaming giraffes and elephants.

Arriving in Hanga the group first toured the school where their leader had taught and what surprised Becker the most was the sign posted which stated “speak English, everything was taught in English except the Swahili course.”

Visiting the school was “the most interesting and overwhelming experience” for Becker. She was able to watch the interaction between the students who board at the school which is supported in part by College of St Benedict. “I thought the older and younger students hanging out together were just siblings but it turns out that the older students just take care of the new younger students.”

Both Becker, with her long hair and another teammate who is blonde fascinated the students. Their location is so isolated that they rarely see white people and especially those with long or blond hair. When Becker reached down to pick something up she was immediately surrounded by children touching her hair.

Another of the highlights for Becker was seeing the library at the school where many of the books that were collected at her own university in drop boxes noted “Books for Africa” were cataloged and used in Africa.
Soccer is the main form of entertainment in the small community and the group had the opportunity along with everyone else in town to watch a game. Becker was surprised at how “green” the community was, “all their power was solar or hydro - the whole village.”

While advanced in their power sources, Becker experienced the centuries old typical African scenes, “Women really do carry things on their head and the children do as well.”

The group shared their meals with their hosts, “scrambled eggs for breakfast and a lot of vegetable curry sauce, collard greens and ugali (a tasteless corn mush). We ate a lot of rice and beans, there were not many choices at all for meals, typically we had the same thing every day for breakfast, lunch and supper. Fortunately our leader brought a small supply of spices which saved us,” Becker recalled.

The next location for their group was in the mountain town of Imiliwaha, where they worked at a convent run orphanage. While there they came and helped with the night feedings in the nursery. “Lots of tough love there, many of the children are not true orphans, their mothers have died and the culture there does not allow for fathers to raise their children. Once they turn 16 or 18 they go back to their families,” explained Becker.

After a few days at the orphanage the group spent a few days in Mbamba Bay on the border of Tanzania and the Congo on the beach. After a few days of R & R they returned to Hanga for a Jubilee celebration for the Bishop who had served there for 50 years.

Becker was impressed with the amount of preparation for the five-hour long mass of celebration. “Dancers had been practicing for months and had special costumes made. The service never got boring as there was so much singing and dancing. You never knew what the baskets on the heads of the people contained for the gifts. Lots of chickens.”

At the Jubilee all of the bishops in the country (over 40) were present along with the former President of Tanzania. Leaving Hanga again the group traveled to Udzungwa Mountains National Park and climbed to the top and of the Sanje Waterfall which is tallest waterfall in Tanzania National Parks.

The next day the group took a safari in Mikumi National Park where they saw zebras, gazelles, wildebeests and other animals all grazing together. Later in the tour they spotted elephants, hippos barely visible in a huge hippo pool, crocodiles, zebras, and baboons. At the beginning of the safari they were thrilled to see a pride of lions before they escaped the heat of the day in bush areas.

The final adventure of their experience was a trip by ferry to Zanzibar. While there they toured a spice plantation, swam with dolphins, and experienced a performance of tribal dances before returning to Dar es Salaam and back to the States.

Becker hasn’t finished her world travels, she will spend the fall semester studying abroad in Fremantle, Australia, a suburb of Perth. While there Becker will attend University of Notre Dame Australia. Becker is looking forward, “to returning to Australia and finding an opportunity for service there. Part of the study abroad program is spending a week with Aboriginals.”
Posted by Leesa Bartu at 8:26 AM