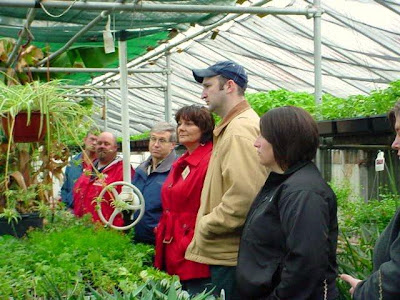 FILLMORE COUNTY - The Odegeo…Leadership for Fillmore County class attended an
Business and Industry session on April 19th, 2011.
The class members met at M-C Industries/Sunflower Marketing in Geneva, where the
group enjoyed rolls and coffee and was welcomed by Plant Manager, Pam Turner. The
members enjoyed a tour of the facility given by several staff members.
The members traveled to Barbur Floral Co in Geneva. Owner Charles Barbur took
the group on a tour of the 1926 greenhouse.
The next stop was Metal Tech Partners in Geneva where plant manager Sam Scott took the group on a tour of the plant. The group was shown how metal is powder coated.
At Heritage Crossings in Geneva Jason Rippe from Bioiberica Nebraska & Bio-Tee USA and Kenton Moore from Horizontal Boring & Tunneling in Exeter gave an overview of the businesses they represented. HB & T is a locally owned company started in 1983 while Bioiberica Nebraska is a Spanish company that came to Geneva in 2000 and Bio-Tee USA is joint venture with Spanish and Dutch owners that began in Geneva in 2009.
Traveling to Shickley the group ate lunch at Geneva State Bank, compliments of Alfs Well Drilling, Lichit Oil & Norder supply.
Tim Alfs from Alfs Well Drilling, Tim Lichti from Lichti Oil, Ted Norder and Justin Pope from Norder Supply, talked to the group about what their businesses offer Fillmore County.
After traveling to rural Grafton the members enjoyed popcorn and ice cream at Bar B Que Specialties. Owner John Burt talked to the members about his business and stores that carry his product. He also sells this product through his website.
The members meet Neil Ely at Ely Farms by Grafton to tour the Ely Farms food processing plant. Ely Farms produce pickled peppers and pickled asparagus.
The final stop of the day was at Erdkamp Motors in Exeter. Erdkamp Motors is an authorized Chrysler dealership. Adam Erdkamp who spoke to the group told them that his grandfather started the business. They offer new and used cars and service vehicles in the greater Exeter area. The group took a tour of the shop and enjoyed the new cars in the showroom.
The May session of the Odegeo. . . Leadership for Fillmore County will focus on Legal and Law Enforcement.
Persons interested in learning more about Odegeo…Leadership for Fillmore County may contact the Fillmore County Development Corporation at 759-4910 or email lentfer.fcdc@genevamail.com or go to www.fillmorecountydevelopment.org.
.
Posted by Leesa Bartu at 8:00 AM