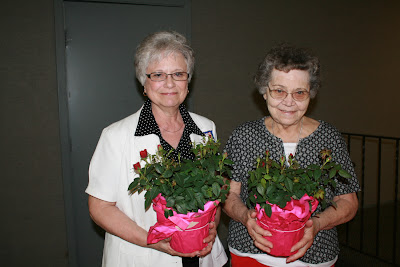 Exeter American Legion Auxiliary hosted its annual Gold Star Tea at the May meeting on August 9th.
The meeting was opened with Deidre Stevens, an Exeter-Milligan Ninth grader sharing about her experiences competing in the National American Miss Nebraska Junior Teen Pageant. She is a member of the Junior Auxiliary in Exeter.
Claire White who will be representing the Auxiliary at the Cornhusker Girls State was presented with a diddy bag of items donated by the Auxiliary for her use at the event.
Several members of the Exeter-Milligan Junior High Band performed for the group under the direction of Instructor Alan Whitford and the accompaniment of Kelsey Moore.
After the performance the Legion Auxiliary held their meeting and then had a program honoring their Gold Star Members, Sharon Dyer and Jane Kaiser.
Those whose lives were lost in service to their country were remembered and honored. After several readings and a prayer a lovely tea was enjoyed and the Gold Star Sisters were presented with miniature roses.
Posted by Leesa Bartu at 11:46 AM