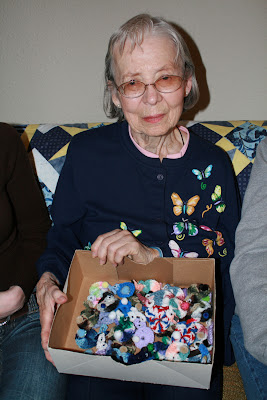 So do the bunnies multiply on their own? Mary Ellen Blatchford crochets over 600 bunnies every year for her family to give away. 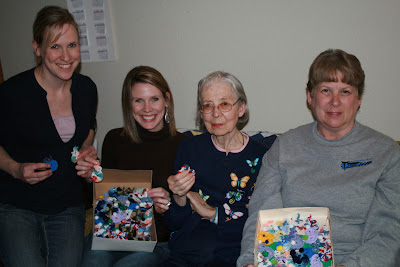 Everyone loves the bunnies that Mary Ellen Blatchford crochets every evening while watching Wheel of Fortune. Her granddaughters have enjoyed her bunnies for years.  Picture from the left are granddaughter, Rita Smith of Omaha, granddaughter Rhonda Veleva of Grand Island, Blatchford and daughter Beth Vavra of Milligan.
Mary Ellen Blatchford, an 89-year-old York resident keeps her hands busy every day reading, emailing on the computer, but most of all crocheting.

Every year for the last 30 years she has made over 300 crocheted bunnies for her daughter and grandchildren and now great-grandchildren. Her family figures she has made over 12,000 bunnies so far and continues to give them all away. This year and for the past 10 years Exeter-Milligan fourth graders have helped her accomplish this goal.

It all started when “a neighbor gave me one. I made a few and gave them to Beth (her daughter). Beth asked for a few more to take somewhere and I decided I better make 100. Thirty years ago when my granddaughter was born when people came to visit her we gave them a bunny,” explained Blatchford.
Blatchford loves to crochet and every evening during Wheel of Fortune she crotchets five bunnies; “I do quite a few more when I watch Lawrence Welk on Saturday evenings.”

During the winter months Blatchford likes to crochet blankets and her specialty, prayer shawls. These are prayed over and then donated to those in need of extra prayer, usually those suffering with an illness.
Blatchford sends about 35 bunnies to each of her five granddaughters. Her granddaughter Rita Smith, of Omaha, was visiting and asked for “just a few more.” Of course, Blatchford encouraged her to take what she needed. Granddaughter Rhonda Veleva of Grand Island asked Blatchford to send her "naked" bunnies this year.  She and a young lady she mentors got to "dress" the bunnies together.

The decorations on the bunnies have morphed a bit over the years. Originally she tried cotton balls for their tails and felt eyes. It was the bunny ears that troubled her the most, “I ironed them, starched them and just couldn’t get them to stand up. We finally started to put a small magnet on them to keep them from flopping over.”

These days Blatchford gets a little assistance putting on the pom pom tails and squiggly eyes. For the last ten years, her daughter, Beth Vavra, has brought a few of the Exeter-Milligan fourth graders to York to help with the embellishments.

Vavra, works as an aide at the Milligan campus and enjoys bringing the girls to meet and help her mother, “We come after school and glue the magnets on the back and then go eat supper while they dry. When we come back we turn them over and glue on the eyes and the pom poms. They get to pick out two to take home and they usually fight about which color pom pom should go on which color bunny. The fourth grade girls look forward to the outing every year.”

So far the bunnies have ended up all over the world. Through foreign exchange students and those donated to servicemen, the bunnies are world travelers. When her granddaughters were in school they took bunnies for each of their classmates and Sunday school classmates every year. Smith recalled that some of her classmates still have all of the bunnies they received throughout the years.

Blatchford’s favorite color is a light pastel bunny, “I don’t like the camouflage but the boys sure do.”

Although Blatchford makes them for Easter decorations, “People leave them up all year,” said Vavra. Blatchford has crocheted other holiday decorations including ghosts, spiders, pumpkins, and hot dogs as refrigerator magnets but only produces the bunnies in mass quantities. Lately she has been working on Oreos and butterflies for granddaughter Roxanne’s upcoming wedding.

Fortunately Blatchford had this year’s batch of bunnies complete before she fell and broke her arm although Vavra claims, “People have joked that she just makes two bunnies, puts them in a box and they multiply.”
Posted by Leesa Bartu at 8:11 AM