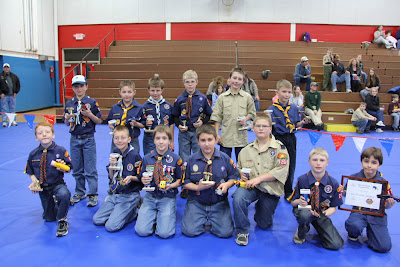 
For the second year in a row the Milford Cub Scout Pack 290 hosted over 100 Cub Scouts and their families for the annual Prairie Winds District Pinewood Derby.
Cub Scouts who have been successful at their pack pinewood derby can participate in the district event.  There are four categories the Scouts can choose from Stock Race and Stock Show, Modified Race and Modified Show.
This year the District added an Open Class race for anyone who has a pinewood derby car but is no longer a Cub Scout and also for siblings.
Five Exeter scouts chose to go to the District event.  Clint Oldehoeft entered the stock race, Braden Capek showed his car in the modified show, Peytan Brandt entered the modified race, Ben Bartu showed in the modified show and Joey Bartu showed in the stock show.
The racing started immediately with many of the scouts running their cars in multiple heats.  Scouts who chose to show their car registered and then were interviewed by three judges from the Cornhusker Council. During the interview the scouts were asked questions about the design, styling and knowledge of tools used to make the car. The majority of points are awarded for knowledge and participation in the construction of the car.
During the event, Pack 218 of Exeter, hosted a belt loop clinic for the scouts who were waiting their turn to race or show their cars. Scouts had the opportunity to earn beltloops in Geography, Nutrition, Map and Compass, and Communication.
The race results were announced first with Nick Andrews of Geneva Pack 175 coming in first in Stock race, Jake Witter of David City Pack 268 took first in the Modified race division with Joey Bartu of Exeter Pack 218 winning the Car Stock show division for the second year in a row and Cade Houk of Milford Pack 290 winning the Modified Show division.  Best of Show was chosen by a vote of the crowd and the judges and was awarded to Jake Nichols of Geneva Pack 175.
Posted by Leesa Bartu at 12:20 PM