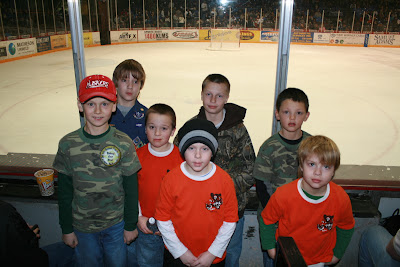 Exeter Cub Scouts attended the Lincoln Stars game Friday night as part of the "Scout Night with the Stars." They are pictured front row from the left Clint Oldehoeft, Alec Schlueter, Braden Capek and Ben Bartu.  Back row from the left are Joey Bartu, Eric Olsen and Jackson Beethe. 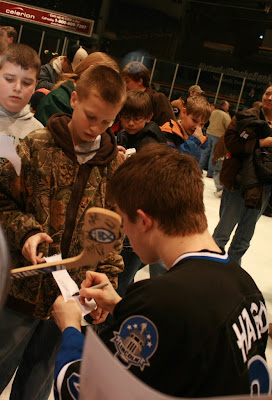 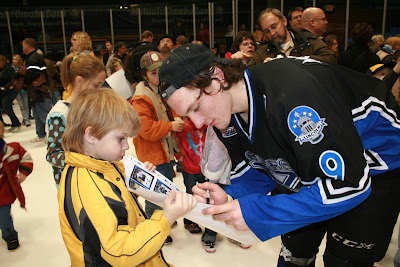 Ben Bartu receives an autograph from Lincoln Star #9 John McCarron.
The Lincoln Stars put on a show Friday night for over 1000 Cub Scouts, Boy Scouts and their family members who joined the crowd at the Icebox in Lincoln.
The annual event "Scout Night with the Stars" brings together scouts from all over the state to enjoy an evening of hockey and interaction with the players.
The Stars made the evening an exciting one as they met up with the Sioux Falls Stampede.  At the end of regulation play the scored was tied 1 - 1. Overtime was just seconds away from ending when The Ice Box exploded as the Stars scored a goal to end the sudden death overtime and claim the win.
After the game the Scouts in uniform were invited on the ice with their families for an autograph and photo session with the players.  The Scouts visited as many players as they liked asking for autographs on playing cards, posters and other hockey paraphernalia.
Posted by Leesa Bartu at 7:13 AM