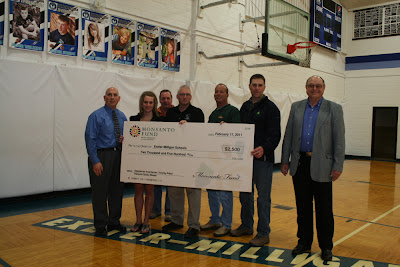 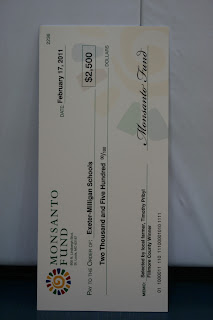 Who doesn't love a giant check???

Exeter-Milligan School received a recent donation of $2500 from the Monsanto “America Grows Communities Program.” It wasn’t something they applied for, it was a prize designated to the school by Tim Pribyl

Pribyl was hesitant to sign up for the Monsanto Fund drawing because he “had to include his email.” He went ahead, filled in the online form and registered for the drawing wondering if he would get a lot of junk email from the entry.  Instead it turned out to be a good thing for Exeter-Milligan School, because Pribyl, who also serves as a school board member, was chosen to receive $2500 to donate to a cause of his choosing.

It was a natural fit for Pribyl to choose the school as he has four children attending the school and  his wife is on the faculty as a high school math teacher.  He told the student body and Superintendent Paul Sheffield, “Monsanto deserves all the thanks,” said Pribyl.

Gabel explained how the program is available in 1200 counties in 38 states with a pool of three million dollars. Recently America Grows Communities has distributed funds to Sandy Creek FFA, Shickley FFA and just this week Gabel was notified that Clay County will be receiving $2500.

Gabel emphasized that the program is designed “to help farmers show the importance of agriculture in their communities.”

Sheffield immediately had plans for the funds.  He announced to the student body that “some of the money will be going to the Math department and since we do not have a FFA program here our FCCLA program will get some, too.  The rest of the money will go towards building a wall of champions in the hallway to the gym.  We will have a case to recognize all of our state champions, both team and individuals.”

Sheffield encouraged anyone who qualifies to register online for the chance to win.  Anyone 21 years or over who farms 250 acres can register at www.growcommunities.com .  The giant check will be on display in Exeter and Milligan for a limited time.
Posted by Leesa Bartu at 8:45 AM