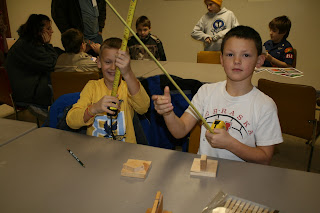 Clint Oldehoeft (left) and Jackson Beethe (right) try out some tape measures before getting down to business on the project they are working on. 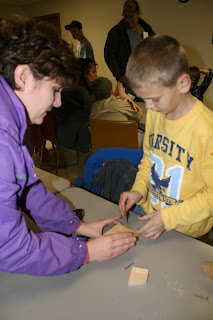 Clint Oldehoeft, gets some help from his Mom, Jill Oldehoeft and a lesson in sanding wood. 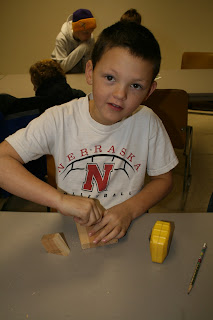 Jackson Beethe, hard at work putting together his recipe card holder.
Sawdust has been flying in Exeter as Exeter Cub Scouts have been working hard preparing for their Blue and Gold Banquet and Pinewood Derby Race at the end of February.  The Blue and Gold Banquet is the annual celebration of the Boy Scout program in the United States.
This year the Webelos II group chose cars as the theme for the banquet this year so all the dens will be making invitations and decorations to go along with the theme.
The Tiger cubs have been learning how to make change and sew on a button.  They will also be sharing their "collections" and making family picture frames.
The Wolf Den worked on their wood project, making recipe card holders.  They also sanded the recipe card holders in preparation for painting their projects at home. When they finished they played the pie tin washer game.
The Bear Den made wooden tool boxes and learned to measure, pre-drill holes and assemble the boxes.  They cut the wood for the handle.
The Webelos learned more about Boy Scouts, planned a flag ceremony and also planned the theme for the Blue and Gold Banquet.
Exeter Cub Scout Pack 218 in part of the Prairie Winds District of the Cornhusker Council of the Boy Scouts of America.
Posted by Leesa Bartu at 8:36 AM