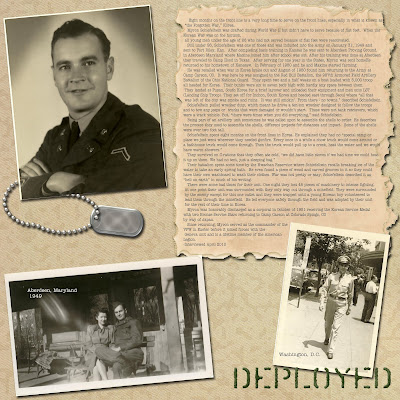 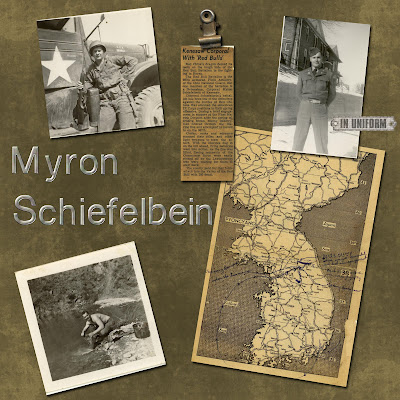 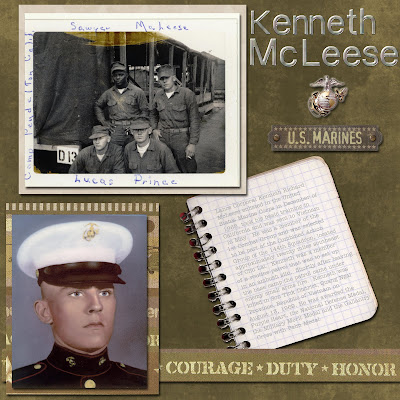 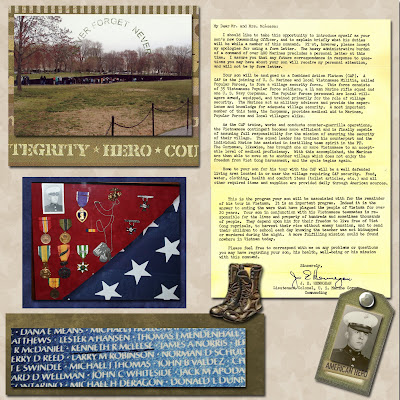 Exeter might seem like a small town but many members of their community have served their country for years and are now getting the recognition they deserve.

Tess Moor, a long time Auxiliary member, knew that something had to be done to preserve the stories of aging veterans, “we were losing our World War II veterans.”

After Moor approached her fellow Auxiliary members about interviewing the veterans and documenting their stories, she contacted local journalist and scrap booker, Leesa Bartu, to see if she could come up with a proposal for the Auxiliary.

Bartu met with the Auxiliary and presented three possibilities for interviewing and creating a historical book about local veterans. The first option was creating a traditional scrapbook with paper and embellishments, scanning photos and printing them out before placing them on a page. Second, Bartu shared the idea of a digital scrapbook page. Digital kits are most often purchased online and include digital paper and embellishments which can be used multiple times on multiple pages. Additional copies of the digital pages can be printed out for family members if they were interested. The third option would be to use an online company to make a storybook or coffee table book, uploading the pictures and stories of the veterans.

The Auxiliary liked the flexibility of the digital scrapbook option and asked Bartu to present the idea to the Legion members. Both groups were very enthusiastic about the project. Tim Wilbeck, a Vietnam Veteran and long-time Legionnaire was “excited about the project because I am a firm believer in it. We should never forget what our veterans have done for this country. It should be another excellent way to hear the stories of what our veterans have done.”

After the interview is completed, Bartu compiles the information from the veteran in a story form and then creates a digital scrapbook page or pages for each veteran. “Digital scrap booking doesn’t require the input of cost for the supplies as they can be used over and over again and also allows for changes to be made easily if things aren’t quite right. It also allows for multiple methods of preservation as the file can be printed, stored online or in a variety of media,” explains Bartu.

American Legion Auxiliary President Annette Gloystein was thrilled with the project, “It will be a real treasure for our community. As this is an ongoing project we will need anyone with military family members from Exeter to contribute information about their service so that they can be included.”

Bartu has begun the process of interviewing the local veterans, starting with World War II and Korean War veterans, scanning their personal photos and documents and then creating scrapbook pages about their experiences. In addition to the photos, letters and poetry that the veterans have shared, several family members have shared medals and other important items from their deceased veterans.

“I feel privileged to be a part of this project. My own grandfather would not share his experiences in World War II they were so atrocious, so I understand that not all veterans will want an in-depth interview. However, we do want to at least have a picture of them, their branch and years of service and recognize any honors they received,” said Bartu.

With some of the interviews and pages complete, Bartu has thoroughly enjoyed spending time with the veterans and often their wives. "When I interviewed Myron Schiefelbein and scanned the picture of him next to his truck it came up on my computer screen and for the first time in their many years of marriage his wife Maxine realized her name was painted on the door of his truck in Korea. It was so special to be able to point that out to her."

As pages are completed they will be viewed by the family or veteran and the Auxiliary and then placed into a scrapbook which will be kept at the Exeter Library, available for the community to look at in the library. Also available at the Exeter Library is a volume titled SERVICE RECORD World War I and II Exeter and Community. This book includes a black and white photo of servicemen from Exeter and a very brief record of their service, branch and location served. This new project hopes to expand the history of World War II veterans and include subsequent wars and conflicts.

Bob Dumpert, who served in the Air Force during Vietnam and was a member of the Air National Guard for over thirty years is also a member of the Exeter Legion. He was very supportive of the scrapbook idea, “This project will continue our preservation of the history of men and women who have served their country from the Exeter area. The Legion wants to honor those who have served and this will be an excellent way to both recognize their contribution to our freedom, and record their history.”

The originator of the project, Moor, looks at the full circle of history, “I’m hoping to inspire the younger generation of the efforts made by their forefathers protecting our freedom.”

Wilbeck shares that thought, “If anyone can learn from what we went through and appreciate it and gain a greater feeling for what the veterans did I am all for it. I like to think that our veterans are a treasure. Where would we be without the sacrifices they have made?”

The community of Exeter plans to remember those sacrifices for many more years to come. If you have a family member from the Exeter area and would like to include them in this project please contact Leesa Bartu or Annette Gloystein.
Posted by Leesa Bartu at 8:43 PM