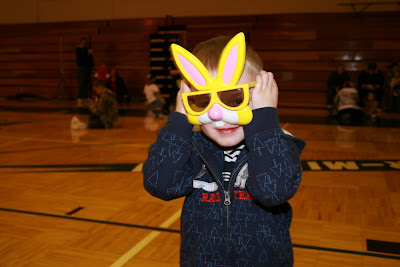 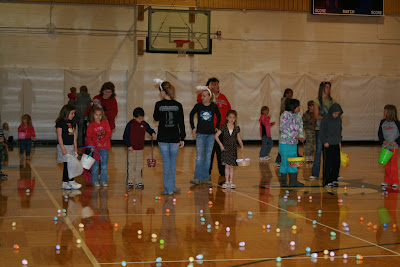 First and second graders get ready to hunt. 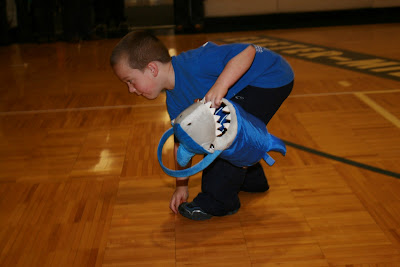 Alec fills his shark up! 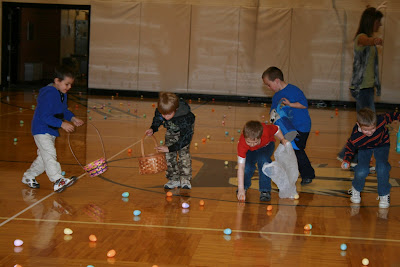 Preschool and kindergarteners don't have to go far to find an egg.

Exeter area kids didn't let a damp day Saturday to rain on their enthusiasm to hunt eggs at the Exeter Chamber of Commerce Easter Egg hunt at the Exeter-Milligan school.

Due to the weather the hunt was moved indoors, but with over 1,000 stuffed eggs there was fun for everyone. More than fifty children hunted for the eggs in four different age groups.

As in the past, the FCCLA students at the Exeter-Milligan school were onhand to hide the eggs and man the registration tables. This year they also, along with other students, stuffed and counted all of the eggs. At the event they also monitored the egg hunting and helped pass out the door prizes.

The preschool, Kindergarten, first and second grade door prizes were donated by Jack and Linda Underwood and Bob Mueller.

FCCLA members, along with their sponsor, Mary Lou Vossler, assisting the Exeter Chamber with the project were Meredith Emshoff, Madison Horne, Sierra Christensen, Mariah Bigelow, Maitlyn Thomsen and Toni Bossaller.
Posted by Leesa Bartu at 9:05 AM