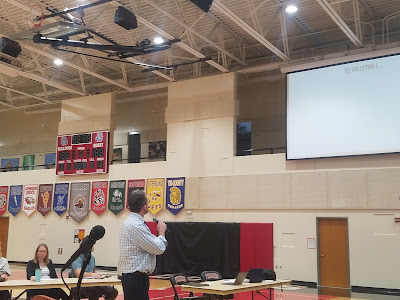 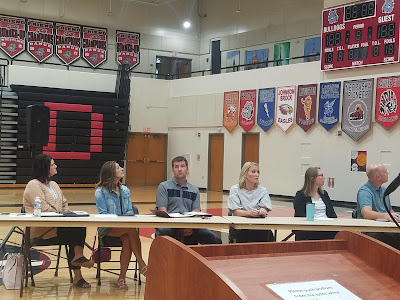 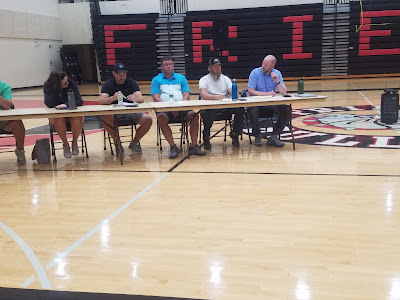 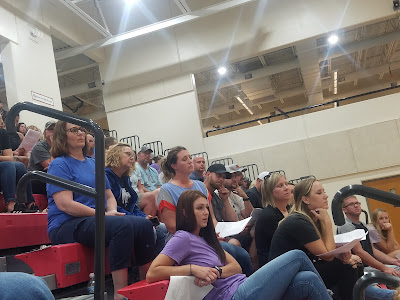 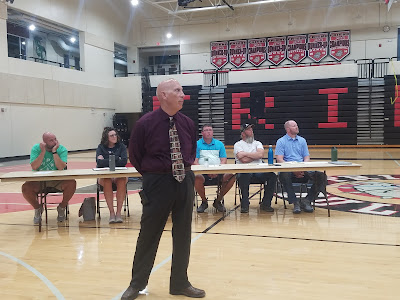 Exeter-Milligan and Friend school boards held a joint public meeting on Wednesday, August 31 in the Friend gymnasium.  Both boards opened an official meeting and held roll call with a large audience in attendance.

First on the agenda Exeter-Milligan Superintendent Paul Sheffield and Friend Superintendent Derek Anderson presented their proposal for cooping all sports and activities between the districts.

Previously coaches from both districts had outlined their ideas for the coop.  The superintendent’s proposal was very similar to the coaches with the exception that several varsity volleyball games that were not a triangular could be played in Exeter.

One Act – Friend – performed in Exeter and Friend, Conference site is Friend.

As the superintendents reviewed each sport and activity they also noted how many students they project to participate.

Anderson noted that they want to do “What fits best revolving around varsity sports.”

Sheffield referenced the possibility of having cross country, e-sports and girls wrestling,”We would be able to offer more opportunities for our students.  Having more students you can have more opportunities.”

The superintendents also briefly discussed conference affiliation.  They plan to apply to the Crossroads conference, “CRC would be the preference.  We have reached out to the Pioneer conference and they would welcome Friend as well as EM,” explained Anderson.

It was explained that all of the coaches would be able to apply for the coaching positions and the administrations would make those decisions together.  They also gave a brief history of how the Bobcat mascot was chosen with student involvement with the intention that it would stay the mascot for future cooping.

As patrons entered the gym they were offered notecards to write questions on.  Sheffield and Anderson fielded the questions.

When asked why a taxpayer survey had not been conducted Anderson responded, “It is still something we are looking at in Friend.  If we go down the line as more than just a coop. . .a lot of different things were taken into consideration at the time it was decided.”

Anderson also responded to a question whether there were reasons other than player numbers for the coop. “Honestly when you look at player numbers that kind of drives the discussion.  It can have an impact on the intensity of practice, competition for playing time.  With more kids it creates more competition.  That’s the idea behind it.”

He went on to explain that there were areas where both districts were struggling.  Exeter-Milligan has not competed in one act for the last few years and last year Friend did not have the high school numbers to compete in one act. “Numbers do matter. . .like the proverb says ‘Iron sharpens iron’ . . .that only benefits our students.”

Another card asked about students leaving the district.  Sheffield explained 36 from the Exeter district had opted out and Anderson noted that 32 opted out of Friend.  Sheffield expounded on the reasons some choose a different district, “Some of those because of the opportunities that they have somewhere else.  What are we doing to bring them back? Maybe offer them more opportunities.”

The next question asked about the community impact of a sports coop. Sheffield immediately responded, “Exeter-Milligan has been doing that for over 20 years and it hasn’t hurt either community.”

There was a brief discussion of the decline of students over the last 20 years.  Sheffield noted that Exeter-Milligan has decreased from 321 to 146 in the last 20 years and Anderson stated that Friend has declined from 354 to 225.

The next portion of the meeting allowed attendees the opportunity to speak at the podium for three minutes.  Nebraska Association of School Board representative Stacie Higgins explained how the process would work and opened the floor.

Former Friend school board member Paul Segner took the microphone first and gave his hearty support to the proposed activity coop.  He asked, “What are we working toward?  What is it just activities?”

He noted that there was a curriculum audit done that showed both districts benefiting from combining but he stated, “Once it was done we looked at and put it away.”

He expressed the need for the districts to have a “longer term vision.”

Next to take the opportunity to speak was Tina Yound, a Milligan resident and an Exeter-Milligan graduate, and an elementary student parent.  She explained that she and her husband Travis moved back to the area because “it has impacted our lives in such a positive way. . .we have all seen what can be achieved when we consolidate.”

Another Milligan resident, Exeter-Milligan graduate and elementary parent Ashley Havel spoke encouraging the boards to coop the activities, “All we want is for our children to have the success that we have had with all the opportunities that were given to us.  Prior to joining together (Exeter and Milligan) we had mediocre teams and afterward we were a powerhouse.”

One more Milligan resident, Exeter-Milligan gradate and elementary parent Rachel Johnson was a junior high student when Exeter and Milligan combined and encouraged the board to take the next step, “Being through this ourselves, we  can promise you, the kids will adapt seamlessly – regardless what their thoughts are beforehand, until actually experiencing it. They will succeed in the transition and form new bonds and friendships that will become lifelong.

She talked about the advantages of cooping activities including “kids trying harder in practice, practicing more off court time to improve their skills, bettering of attitudes and becoming aware that they will have to improve to be that starter. They will have higher numbers to scrimmage and mimicking game like scenarios during practice.  These skills will transition to lifetime positive qualities in our youth.”

She finished noting the saying posted in the Exeter-Milligan school, “We came in as strangers we left as family.”

EMF junior high football coach Jay Hitchcock recalled the days prior to cooping football that they just didn’t have enough kids to practice. “Because we coop we have three coaches and we can divide into three groups and teach them the skills they need.  I cannot image not having the coop. I love the EM kids just as much as I love the Friend kids.”

Adam Gordon a Friend resident was positive about the “amazing opportunity for our kids. I don’t see a downside just like most people that have come up and talked.  Give people the opportunity to earn the position they are playing. That competition is really good.”

Jewels Knocke, mayor of Friend, explained the need for more numbers for sports.  She  gave the example of her son, a tenth grader at Friend who wrestles but doesn’t have another wrestler to practice with.

Troy Kallhoff  a junior at EM explained he was “not going to say I am for the coop or against the coop.  I have heard that if the coop does happen more students would leave.  I don’t really know if having 30 on both teams would be feasible.  I don’t think there has been enough thought put into the academic portion of this coop.”

Selah Petersen a freshman at EM talked about the struggles the EM volleyball team has had with just nine students on the team.  (I think Selah was going to text her speech to Amy)

Sara Pella, an Exeter resident, a former Exeter-Milligan teacher, the current Exeter-Milligan basketball coach and now a long term substitute teacher at Friend was very positive about cooping activities.  She expressed that she would love to see her daughter, who is two, have the “opportunities of the coop.”

With no more speakers taking the podium the superintendents briefly outlined the next steps which including both boards voting on a coop agreement at their September meeting.  Exeter-Milligan will meet on Wednesday, September 14 at 7:30 in Exeter and Friend board will meet on Monday, September 12 at 7:30 p.m.

The two boards took turns approving a motion to close the meeting .