Exeter Days - Dinner and a Movie 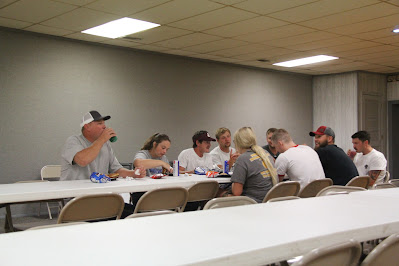 Everyone enjoyed the free burger supper at the Legion sponsored by the Exeter Area Community Foundation. 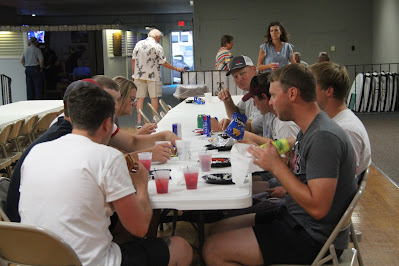 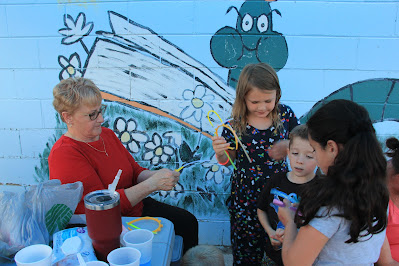 It was time to get ready for the movie with some fun glow in the dark body paint sponsored by the Exeter-Milligan Booster Club.  Chezney Kanode paints on Westin Yound as they wait for the movie to start. 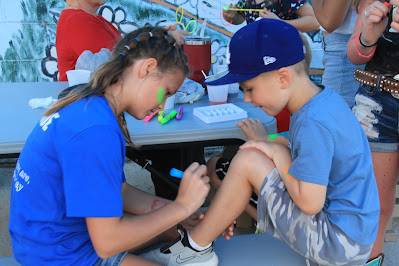 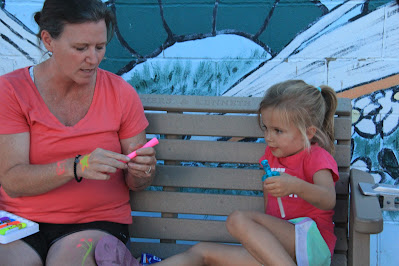 Kolbie Kahlandt watches as Lisa Kanode paints one more layer of glow in the dark paint on the heart on her leg. 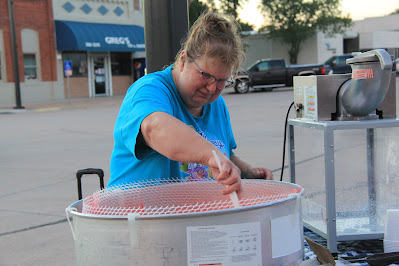 Exeter Librarian Cindy Markowski does double duty as she makes cotton candy and snow cones before the movie night.  All of the proceeds went to the Exeter Library.  Markowski was busy making both at various locations throughout the weekend. 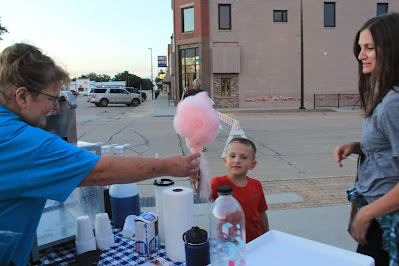 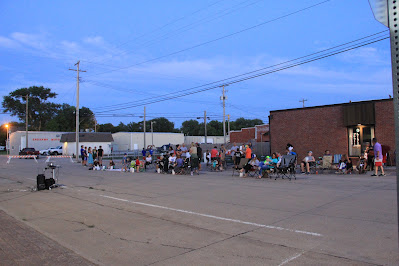 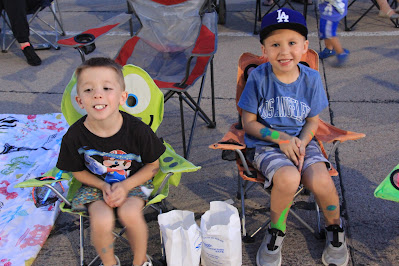 Leo Nicholas, left, and Westin Yound, are all ready to watch the movie in downtown Exeter during Exeter Days. 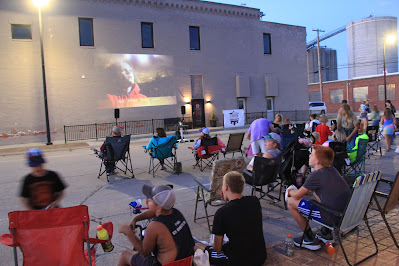 “E.T.” was the show to watch when it got dark in Exeter on Friday night during Exeter days.

There were definitely “Small Town Vibes” in Exeter last weekend as the village held their annual summer celebration.  Instead of just a few select activities the weekend was packed with fun for the whole family.

About a month ago, Exeter resident, Sara Pella decided she wanted to see how she could expand on the traditional weekend activities and from there the event exploded adding tons of art activities along with a triathlon,  a 3 on 3 basketball tournament and so much more.

The weekend began with the traditional meal at the legion which was sponsored by the Exeter Area Community Foundation.  There was also a “seltzer sippin’” event which allowed those 21 and over to taste a new alcohol product sold by Greg’s Market.

Inside the legion an art activity was added to the evening which allowed everyone to make an ET picture to go with the movie.  Before the movie started there were snow cones and cotton candy (with proceeds going to the library) and glow in the dark body paint sponsored by the Exeter-Milligan Booster Club.

Lawn chairs were set up and popcorn was passed around in anticipation of the showing of E T on the side of the Live Well Massage building.

Saturday morning was also full of activities with a co-ed softball tournament, beer mile, garage sales, art in the park which included vendors, an art display and art activities.  The pool was also open for a free swim with games and prizes donated by Twisted Wrench.

There were also a bookmobile and food trucks at the park.  In the afternoon, Handy Hands 4H club sold soft serve ice cream downtown which was sponsored by Manning Grain.  A corn hole tournament was held behind the Fire Hall with over 40 teams entered.

The parade started at 3 p.m. with Exeter resident Jameson Trauger singing the national anthem as the Color Guard stopped in front of the Legion.  Trauger then announced the rest of the entries in the parade.  The parade entrants threw out tons of candy along with popsicles, stickers and tattoos.

Another new event, the three on three basketball tournament was very popular.  There were four divisions of players and the tournament went on for over four hours before all the winners were crowned.

Before the street dance, the senior center sponsored bingo and the Exeter Women’s Club sold slices of pie.  The Exeter Volunteer Fire Department served a bbq pork dinner which sold out quickly.  The beer garden was open at five p.m. and “Dad Rock” took the stage from 8 p.m. until midnight.

Sunday morning started with a community church service in the park by Pastor Murry Johnston of the Exeter United Methodist Church.  Next on the schedule was the first ever Triathlon sponsored by the Exeter Area Community Foundation.  Each age group had to swim, ride their bike and run a course through the south side of Exeter.  As the age increased, so did the length of each portion of their triathlon.

Also at Gilberts park there was face painting by the Exeter-Milligan cheerleaders, cotton candy and snow cones, miniature horse rides and the pool was open for free swim.

Pella had a long list of people to thank including the many sponsors for the different events.  She also noted that several of the ideas for events came from Lisa Kanode who was instrumental in setting up many of the art activities along with introducing the idea of the triathlon to Pella.

All in all it was truly a fun filled family weekend definitely packed with “Small Town Vibes.”