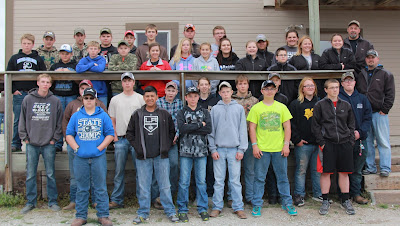 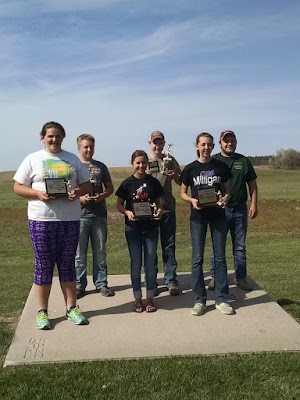 Conference team placing was recognized at the final conference shoot for the Exeter-Milligan Friend Trap Team.  Front row from the left Tara Mueller, Sidney Steyer and Kate Jansky all placed on the First team for the women’s senior division.  Back row from the left Max Zeleny was a member of the second team for junior boys and Blake Stueben made the Senior boy’s third team, Kirby Soukup received a scholarship.

The team which is divided into Juniors (age 12 through 8th grade) and Seniors (9 – 12th grade).  They competed with around 250 other shooters every Saturday morning at Crooked Creek club near Aurora.

The E/M/F team had 15 Juniors and  23 Seniors this year.  Each Saturday the Seniors would shoot 50 clays to start the day at the 16 yard line followed by the juniors who shot 50.  In the afternoon, each Senior would shoot handicaps, shooting at the line which was half the distance of their score in the first round (i.e. if they shot a 46 in the first round they would be at the 23 yard line for handicap).

Each year the team holds a soup and sandwich lunch in Exeter along with a labor auction.  Coach Justin Harre was very thankful for the backing the team receives, “Once again we had tremendous support from the community at the fundraiser soup luncheon and auction.  This pays for all of their entry fees at conference and at the state shoot along with all of their practice clays.  The majority of the cost of their team coats is paid for also.”

The team also participates in a gun raffle statewide.  Since the gun raffle has gone so well they were able to lower the entry fees for the conference.  Most of the raffle proceeds go toward scholarships for the club members.

The season went well according to Harre, “Our girls were pretty dominant.  Our boys had some good weeks with a lot of personal bests.”

On the boys side of the bracket Blake Steuben was a member of the third team of senior boys while Max Zeleny made the second team for junior boys.  Throughout the season three members of the boys team shot 25 straight including Noah Lambrecht, Max Zeleny and Brayden Olsen.  Kirby Soukup received a $500 scholarship from the Central Nebraska Trapshooting Conference.

Coach Soukup noted, “We had a lot of 24’s during our conference shoots.  I definitely saw a lot of improvement from our senior team.  Every week we were just under placing at conference.”

The season culminated with the team participating in the 47th Annual Cornhusker National Jr/Sr High School Shoot sponsored by the Nebraska Game and Parks and held in Doniphan each year.  Over 2500 students participated this year.

While the E/M/F team didn’t bring home any hardware at the state meet this year Harre was pleased with their performance, “We had some good scores but the weather was unfavorable with lots of rain and cool temperatures.  I thought the kids shot really well for the conditions that they were shooting in.”

It’s not just about being a good shot according to Harre, “I think it is being mentally prepared to focus on each rock despite the weather.”

Harre couldn’t leave the conversation without commenting on the assistance from the parents, “We had a lot of help from the parents this year and I want to thank them for supporting the team again this year.”