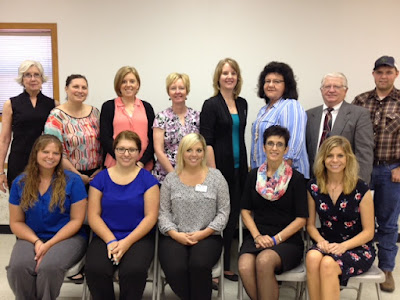 The 2014-15 Odegeo.  . .Leadership for Fillmore County participants graduated from the nine-month leadership course on June 16th.  The event was held at the VFW in Geneva.

The speaker for the graduation was John E. Nelson a graduate of Geneva who served as a State Senator from the Omaha area for two terms. He was appointed by Governor Heinemann as the Lt. Governor of Nebraska in September in 2014 and held that position until January 8, 2015.  His remarks centered on how important it is to have good communication to be an effective leader.

Bryce Kassik also recognized the 31 Fillmore County businesses who had helped sponsor lunches and snacks during the leadership sessions as well as the graduation lunch.  Even more businesses and organizations shared information about their entities throughout the year as the Leadership class traveled from place to place learning about the various aspects of Fillmore County.
As each member received their plaque from Todd Boller or Rhonda Stokebrand they gave a statement of what the Leadership sessions had given them.  They then stated how they will use the knowledge and skills they learned to get involved in their community, work on an issues, run for office or serve on a board.