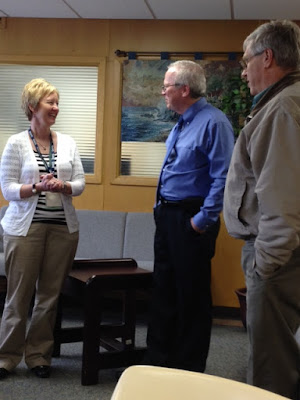 Educator.  Throughout the year she talked with the class  about power and

about Fillmore County, she asked “what will be your next step to emerge as a leader”.
The class members spent several hours at the Courthouse where they

Secretary Brandie Conway, and learned about the dispatcher’s duties

Court, shared with the group their responsibilities and they part they play in the court

Advocate), explained how this program gives the judge information about the child’s

The group then traveled to the Heartland Boys Home.  Jerry Craig,

Director, explained the program and gave a tour of the facility. Several students

Narcotics Unit, gave a slide presentation about the drugs that are found in Nebraska and

the ways they are being combated.

The final stop of the day was at Youth Rehabilitation & Treatment Center (YRTC).  Dan Scarborough, Administrator, welcomed the class.  Breaking into two groups, two of the staff took the class on the tour of the Center. After the tour Dan Scarborough, Cindy Betka, Drug and Alcohol Treatment Program Director, Anita Haumont, Volunteer Coordinator, and Dr. Cindy Nash, clinical psychologist, answered questions about the programs at the Center.
On June 16th the 2014-2015 Odegeo…Leadership for Fillmore County

Class will graduate from the program with a special ceremony and lunch at the VFW.