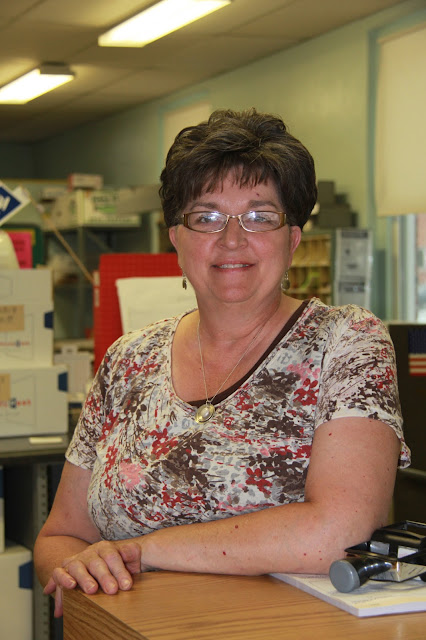 Change has been the operative word at the Exeter Post Office recently.

In April, the United States Postal Service shortened the operation hours at the Exeter office changing it from a full 40-hour a week office to a six hour office retaining the Saturday hours.

Many of the post offices in rural Nebraska have had their hours drastically cut which also required current postmasters of smaller locations to relocate to post offices in larger communities.

In October 2012 Exeter Postmaster Vicki Ozenbaugh accepted the postmaster position in Sutton (where she had been the officer in charge (OIC) for several years).  While Ozenbaugh served in Sutton Exeter relied on several OIC’s including Margie Johnson and Lynn Strate.  Although the post office functioned as it was supposed to the USPS technically had no postmaster in Exeter and in April finally declared the Postmaster position open for applications.

Current postmasters looking for larger postal offices were the first that were allowed to apply for this position.  With openings in Friend, Fairmont, Exeter and Beaver Crossing locally, there were lots of options to choose from.

Exeter was lucky enough to steal Kathy Stych from Cordova.  Stych applied for the Exeter position, just 10 miles from her Cordova home, and started training for the new position with Strate on Wednesday, June 12th.

Stych was the Postmaster in Cordova from 1998 to the present and filled in at the post office for a number of years before becoming postmaster.  She assured customers that there would be “No changes since the April hour change and no change in service.  I’m just another friendly helpful face behind the window.”

For Stych, however, there will be a few changes.  “This is a lot bigger office for me.  Some of the equipment is a little different, I didn’t have a meter before or a rural route and the computer is newer.”

Stych had in office training last week and always has fellow postmasters to call on if she needs extra help.
At home in Cordova, Stych has been married to husband Bernie for 42 years.  They have three children and eight grandchildren who live in Omaha and Kansas City.  The Stych’s are active members at Trinity Lutheran Church in Cordova and although they no longer own a business in Cordova they are still very involved in the community.
Posted by Leesa Bartu at 7:30 AM