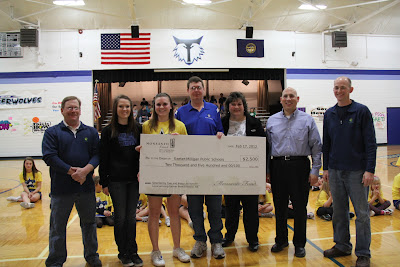 Brad Hogan, a representative from Monsanto, presented the donation to Tom Vossler who was selected as the Fillmore County winner for the Monsanto Fund's America's Farmers Grow Communities.

All eligible farmers in the county could enter to win a $2,500 donation for a local nonprofit of their choice.  Monasanto has donated more than $3.1 million into rural American through the program.  Vossler chose to make the FCCLA program the recipient of his winnings.

Also on hand to present the donation was local Channel seed dealer Travis Due.  Receiving the funds were Exeter-Milligan FCCLA Chapter President Erica Yound along with District FCCLA President Rebecca Vossler.  Both ladies spoke expressing their gratitude both to Monsanto for the generous donation and especially to Vossler for choosing their program as the recipient of the donation.

Exeter-Milligan Family Consumer Science Teacher and FCCLA advisor Mary Lou Vossler also thanked Monsanto and Vossler for their donation.  "We plan to use the funds for the members to attend a session of Zumba.  I am also working on an educational session for the group about drunk driving, and internet safety.  We will also use this donation to offset some of the expenses for our girls to go to the state convention and also hopefully we will have several groups going to the national convention in Orlando."
Posted by Leesa Bartu at 8:41 AM